My night with a professional.....comedian. That's not right!! 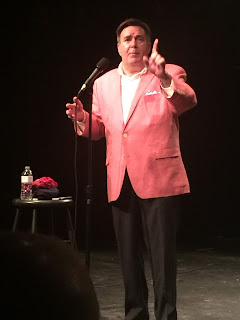 Let's start with a trip trip down memory lane from the ole' Dimension household...

I'll set the stage: its late 1980's, I was just a youngster, late teens, and was highly obsessed with comedy. Around this time, I became familiar with comedians like Andrew Dice Clay, Bob Nelson, Rick Ducommun and Howie Mandel to name a few. One comic in particular made a lasting impression, not just upon me, but upon my entire family. This comedian was Kevin Meaney.

Kevin Meaney was funny, charismatic and over the top. Doing impressions of his family, how over bearing his Mother was and the pure ridiculousness of everyday life made perfect sense to me. My Dad had raised me on Jonathan Winters and Kevin really reminded me of Winters, with his great sense of storytelling and sketch mastery. "That's not right" and "go upstairs and put your big pants on" echoed our household for years and it even leaked into my own household, when my wife and I would tell our kids "stop walking around with that puss on your face!" They never laughed, but we sure did.

In our hometown, we have a theater; The Act II Playhouse, here in Ambler, and while Kim and I were out for our walk, I noticed they host comedy shows. I had never been to this theater, even though I lived here for 15 years, my wife has lived here, basically her entire life. I have no idea why I've never been there before, but let's just say, I'm glad we investigated things further.

I came home, looked online and, nearly fell over. I see "Kevin Meaney" coming to our hometown!! After being a fan for nearly 30 years, the opportunity had come to see him...live!! Obviously, you can see, just by my use of exclamation marks, I was flipping out. I grabbed two, 2nd row seats and we were set.

Let's just talk about the theater for second, before I discuss the night in question. The theater was so great. Its quaint, intimate and I was regretting not being there before. It will be a monthly spot for Kim and I. There is nothing better than being part of a small town and enjoying the finer things like the Act II Playhouse.

Now, Kevin came out like a house on fire, for the first 25 minutes, he was firing off funny stories, relatable family commentary and punchline after punchline and Kim and I were dying. Just full of energy. The entire, sold out crowd was in tears. He did new material, plus some of his most notable. He involved the crowd but here is where you can tell that Kevin is seasoned comedian....

Meaney chose stories and content based upon the demographic of the crowd. The audience was made up of mostly 35-65 yr olds and every story he told was relatable. Situations we can all look back upon and laugh, like going outside and playing, by digging a hole, not staring at people while driving and your parents being able to reach into the backseat, no matter how far away you squirmed from their reach. It was all 100% on point and took us all back to growing up.

I can't recommend these 2 things anymore.

Here are all your ways to stay in contact with them: