Randy the Ram is a piece of Sh*t

Maybe I'm just hyper sensitive after spending 16 years in the world of professional wrestling, but man, I watched The Wrestler yesterday and thought to myself "Randy the Ram is a real A-Hole". Now, its been a while since I've watched the Darren Aronofsky cult indie film The Wrestler, starring Mickey Rourke. It happened to be playing on HBO and I turned it on and it really hit home.


Let me clear the air, in all honesty, I really like this movie but this is just a rant about how damn good of a written character Randy the Ram is, and really how great Rourke portrays him. I remember first seeing this movie and thinking about how relatable the character is to some people I know. I hate how poorly professional wrestling is portrayed by most films, well except Ready to Rumble, but even that, Jimmy King was a bum.

Ok, so let's look at what makes up such a miserable piece of shit like Randy the Ram:

Horrible Father - Ok, midway through the movie, Randy (Robin as his birth name) develops a heart and wants to rehab his relationship with his daughter. This relationship is rocky and she even let's him know that he is, in fact, a piece of shit. In the end, he chooses himself over her and that bridge is burnt.

Selfishness - Yep, as an entertainer/wrestler, Randy is a selfish bastard. He loves the limelight. Sure, his best days are behind him and now he is forced to shill his name value to small, shitty independent feds. Randy, only knowing wrestling as his life style is a constant worker in this film, from not walking away to lying about his health, potentially dying in the ring. You almost want to feel bad for him but I've seen this person, many times within wrestling. In his eyes, he has nothing to live for but the cheers and while you might think "awe man, he loves us", he doesn't. This is part of his selfishness.


Junkie - Ok, while you might think, "he really only did some steroids", the list of shit he put into his body was staggering. Not to mention recreationally doing drugs and probably a borderline alcoholic, Randy does all kinds of growth hormones but draws the line at "that Chinese shit". Again, I know people and have lost friends who are JUST like this!! Aronofsky really did his homework and it hurts a little to watch.


Whore - Randy is a whore. He is obsessed with Marisa Tomei who portrays a stripper, but unlike Randy, she is trying to get out to make a better life for her and her son. The Ram is a part of the sickness and can not escape. He hates everything in his life except wrestling.


Now that I have dismantled Randy the Ram, remember, I truly do like this movie. This was me picking apart the character design and honestly admiring, not only the realism but the portrayal. This movie has you glued from the start to the finish.... 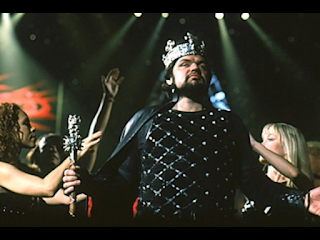 Speaking of the finish...I'm always curious what YOU think happened? Remember, Randy climbs to the top rope, about to deliver the Ram Jam on the Ayatollah and while he is looking around, right as he jumps....we go black. Did he win and live happily ever after? Did he die and leave his mark on wrestling for dying in the ROH ring? You tell me what You think.

Until next time...Ram Jams for everyone.