Hacks...and why I hate them. My tips on how to not be one! 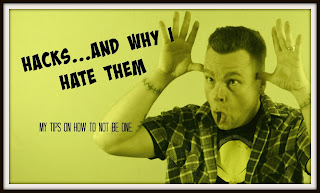 Hacks...ugh..No, not the computer hacks that could potentially steal our nudes and send them to our bosses and not even those crafty life hacks (like peeing in there shower to save water), its those hacks that steal jokes or memes and claim how clever they are. Hell, I've even noticed the news hacks lately. You know, those sites that steal content from credible sources like THEY are all knowing when in fact all they really do is lift others hard work, and preach it like it's their own.

Definition Of A Hack: By Joe Fernandez. It's a term that most comics do not want to be called. It means you're unoriginal, derivative, and/or a joke thief. It is generally someone who is disliked and in some circles detested for taking comedy to its basest level.

The above definition can be used without the "comedian" context and can be used with social media instead. Chalk me up as one of those people who draws inspiration from sources that aren't always viewed as funny, witty or clever (not in favor with the masses). No, I'm not saying my sense of humor is any better than anyone else's, I just like what I like.

Its a short list, but keep in mind, it changes weekly. Although, Sarah Silverman and Bo Turnham have been on my list for quite a while. I LOVE "The Sarah Silverman Program" and Bo's 'Zach Stone is Gonna Be Famous" as two examples of what occupies my viewing time.

1. Stop stealing!! This means stop using other peoples tweets as your own. Stop stealing shitty meme's. I get it...everyone wants to be funny...but not everyone is. Satire is dying and we, those on the internet are killing it. Be a free thinker, learn what entertains you and stop letting "likes" and "shares" run your life. Stop visiting "news" sites that just post articles without every crediting anyone. I saw a lot of it this past week.

2. Watch what YOU like!! Eventually, you will wake up and say "wait..since when do I like this?". It might take some time, but it'll happen. Stop asking "what did you think? I'm thinking about watching it." Apparently you aren't thinking very hard. You're relying on someone else's opinion to sway what you want to watch? Then, you will just join that person on sharing "best thing on TV" or "OMG...another remake!!" Just take a break. Be your own person. Again, you can stand out and not worry about it. And trust me...all remakes aren't horrible and I promise you childhood will not need therapy.

I remember, as a kid (12 years old) buying comedy books and reading them, along with comics while watching pro wrestling. I remember being told I was a nerd because when I was 9, i made a Frankenstein head to wear for Halloween out of cereal boxes. I remember being shunned because I didn't fit in. Why is this relevant? Because now being a nerd is cool. I still don't follow the masses. I still like what I liked as a kid. My house is still full of horror movies, Godzilla toys and shit from Sid and Marty Krofft.

How to stop being a hack is simple - give credit to those who deserve it. Stop worrying about liking what others like and choose your own path. Now I know this blog took a view off turns but who cares? Seriously...the message was simple and I created a "top of mind awareness" of what NOT to do and I promise you, when you head back to FB or Twitter, you'll second guess what you write about...or at least I hope you will. Choose wisely young jedi...

"and may the force be with you"
- Luke Skywalker (probably)

Email ThisBlogThis!Share to TwitterShare to FacebookShare to Pinterest
Labels: be your own person, bo burnham, comedian, comedy, comedy hacks, do it yourself, hacks, how to draw followers, how to's, influence, life hacks, positivity, social media, stealing jokes, stop stealing, will sasso