This week continued the craziness with my viewing habits. If anything, I've notice I'm staying in the Asian film swing but now venturing into other sub-categories. I continue to rent from Netflix for the discs I don't have, but I figured I would make notes of what is also streaming and where.


This week I saw a few that actually created an impulse for me to buy and I figured I would lightly highlight them as well. Keep in mind, this isn't designed to be a review, but more of what options are out there...good or bad.


I want to mention two that I absolutely feel in love with: Vampire Girl vs Frankenstein Girl, being the first of the two. I must admit I had never seen this one and once I started this one, I was hooked. So much fun. This is streaming on Hulu Plus and its a blast. I believe it plays almost like the perfect transition of live action anime. Really a blast. I ended up buying this bluray and it was very affordable (it's not here yet), now I'm hoping they have some extras on the disc. 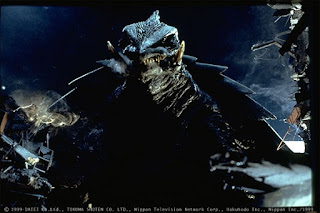 The second one was Gamera 3 - Revenge of Iris. This is another film that I grabbed the bluray of (actually the three pack which sells for less than $10 and can be found almost everywhere) years ago and it just sat on my shelf with no love.

I truly made a mistake by not revisiting this film sooner. Wow, what a tremendous Kaiju film. Released in 1999, Gamera himself, is a beast with an amazing suit and overall look thats just fierce. The miniatures and scale of everything is fantastic. I need another viewing or two, but this is easily in my top few Kaiju films right now. I think it really has some very real moments but still the charm of being fantasy.

Ok, now onto the list of what I've been watching:

Godzilla vs Megalon (Streaming on Hulu)

Alien Vs Ninja (Streaming on Hulu)

This Girl is Baddass (Streaming on Netflix)


After last week, I ended up buying a few titles. The Machine Girl was offered as a 3 disc, steel book set and it has a bunch of extras and some additional short shorts. With my current obsession, I think I'm just a completist and needed to have this set.


Following suite, I already had The Machine Girl and Tokyo Gore Police but once I saw they both had different sets with additional offerings, I needed them. So, I grabbed Tokyo Gore Police 1.5. It has some short films that were fun, yet bizarre to watch....I love that shit.


Thats it for now, but this weekend, I plan on a Gamera marathon and really want to watch and enjoy these films again. Have a great week!
Posted by Rob Dimension at 1:17 PM