Our Haul of the Week! Aug 31st

Our Haul of the Week! Aug 31st


This was an interesting week of grabs, just based on the variety of items. I started to go back and add some older issues of G-Fan magazine that I once had. If you aren't familiar with G-Fan, this is a magazine thats dedicated to Godzilla, plus all other Kaiju and Tokusatsu types of films from Japan (mostly). In the magazine, they often discuss history, toys and upcoming films.


We ordered 7 back issues this week, or should I say, 7 issues of love. These issues consisted around the years 1999 and 2000. This was when we had our retail store and we actually we advertising in G-Fan, so I wanted to retain these issues because, after a move and closing our store, they were lost in the shuffle. Some sentimental value there.


The Spirit Halloween store opened up and while Kim and I were out, we just had to stop in. I will be the 1st to admit that these stores have become so commercial, I rarely end up with anything from these places anymore. Now, because they had just opened, they had tons of costumes, masks and all kinds of cool additions that would allow you to celebrate Halloween the entire year. All Kim and I ended up with was a few pairs of socks: for me Red Power Rangers, for her Sharks and Pink Power Rangers. We still supported them but we'd also rather support the little guys for things to decorate our house with. 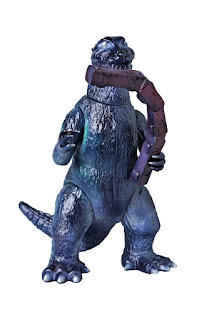 On Saturday we also attended our pal, Chris's soft opening for his store Panther Comics in Washington Township, NJ. Kim and I, of course went with hopes for new Godzilla merchandise that we don't have but desperately need (haha). Chris didn't have a lot, but he had a few things and one thing in particular grabbed Kim's attention. The Medicom Godzilla: Vinyl Wars - First Godzilla (Shodai-Goji) Sofubi vinyl figure. You can see by the picture that he's holding a train, which is pretty sick. This is a reissue from the 2003 line, but is still limited to 200. We are happy to have him as now permanently in our humble abode.


As for DVD's this week, well a lot more of the crazy of course, but some classics too. Some of my classic Godzilla films went missing so little by little, at an average of $5 each, we have been replacing them. I grabbed : Terror of MechaGodzilla and Ghidorah The Three Headed Monster. Both dvds have the original Japanese versions and English dubs. Then, for horror, I finally got a copy of Stacy, which I love just because of the comedic look at horror it has. If you're an Evil Dead fan, make sure you grab this for sure...it'll bring a smile to your face. Lastly, I replaced my copy of Meatball Machine. This is purely insanity and a lot of fun.


To round out the weekend, Kim dragged me to Yankee Candle for their Fall/Halloween releases. This was the 1st time I had been a part of a Yankee Candle seasonal release (I never even knew what that was before this weekend). Kim explained that they had some special Halloween scents, and to be quite honest, I do enjoy a good candle (currently Cotton Candy is my favorite) burning while I'm writing. Nothing better.


So, I was game and we headed to YC, but apparently this is a big deal as old ladies and young women were pushing and shoving to get these candles. We actually got more than the picture shows as they were buy 1, get 1 free. I now know Kim has a candle weakness as she jumped in, fists flying and came out we some groovy cool items.  A pumpkin candy dish, several Candy Corn candles, including one mixed with Buttercream (its so hard to not just eat these things) and lastly a candle holder, in the shape of a witches hand. Since Fall and the Halloween season are our legitimate favorites, I guess she figured we'd stock up for the year.
Posted by Rob Dimension at 6:48 AM