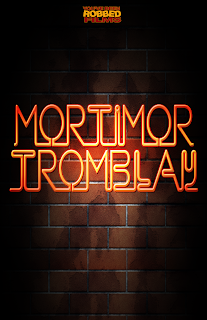 Synopsis - Mortimor Tromblay wants to be a stand up comedian. His biggest critics, his parents are front and center for his debut performance. Follow Mortimor on his special night that's intermingled with strange moments and odd characters. A quirky dark comedy film that will have you requesting your bill before the last act goes on stage.

Also on the DVD:

The Last Laugh - The making of Mortimor Tromblay - Listen to the cast and crew discuss the film, the atmosphere and more.

The Mortimor Diaries - Rob Dimension lets you in on the week prior to filming plus the weeks after.

The Journey Season 2 (episode 1) - Its a year later and 15 year old Curt Robinson and more discuss the first year of his journey and still what obstacles are in his way to continue to be a professional wrestler.

Bunny Cop Teaser - In the works for 2015. Detective McFluffy could be the worlds remaining hope in the intergalactic threat of masked luchadore, Brutal Wasteland.

Posted by Rob Dimension at 9:53 AM