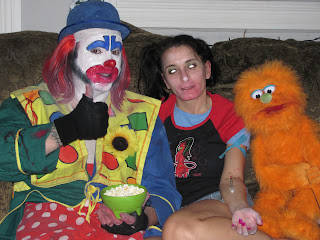 It's always an honor when another film maker reaches out to see your work. Tom Berdinski, to me, drew the blue print for how to release Independent films. He uses a modest budget and makes EVERYONE aware of his projects. I mean, who hasn't heard of the Italian Zombie Movie? When Tom asked me to see the film, I immediately sent out a copy.

He had this too say:

I thoroughly enjoyed "No Clowning around"! It's dark, uncomfortably funny and very-well acted and directed. The music, costumes and effects are also spot-on. I especially loved the shot variety - I think that's key in low-budget efforts: Keep the shots short and varied so no one dwells too much on the limitations necessitated by the budget. Everyone is clearly on the same page in this one - Something that's hard to do with a low budget. In my opinion, the only flaw was not making it feature length. There is a lot of back story here waiting to be explored... Maybe they'll make more? Let's hope so!
Thomas Berdinski, Writer, Director, Producer
The Cult of Moi and Vous Film Producioni Co LLC

Special Thank you to Tom for taking the time, make sure you visit http://www.italianzombiemovie.com and support Independent film making.
Posted by Rob Dimension at 11:22 AM