No Clowning Around Starts Shooting!!

No Clowning Around Start Shooting
Update for Sept 5th

﻿Yesterday marked the start of principle shooting for my First short film, No Clowning Around. The film is my first attempt at writing a short, I will also be co-directing with Matt Burd, whom I've worked with before. I figured I would keep an online diary of sorts documenting the progress with both the good and the bad, hoping you enjoy the ride along the way. 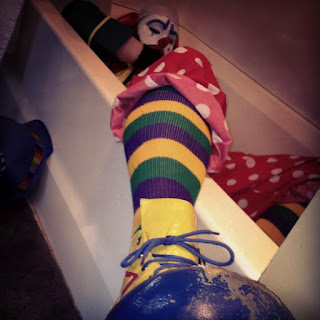 Call time is 8am - Now the weather was a concern for the first day, since we were dealing with the remnants of tropical storm Issac. We started off with some sprinkles and overcast, we were able to grab the necessary shots from outside that we wanted too except some interactions that we can simply pick up on a light day of shooting we have scheduled. Later in the day, the rain got much, much worse, making filming a bit more problematic, so much so, we could hear the rain on the roof and were forced to hang tight while the storm passed.

Yesterday also marked the first time I worked with a child on set...haha. It provided laughs and she did fantastic. Kids are so cute and make simple comments that are purely genuine. She practiced and knew her lines, but the curiosity of a 4 year old staring a clown, drunk in a bath tub created some fun. After watching some of the daily's, I was very happy. 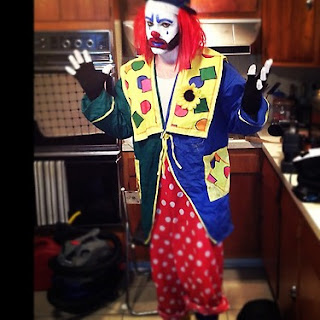 Directing while starring in the film...oh boy, where do I start with this one? When I worked with Matt before, it was either our stint on Late Night at the Horror Hotel or one of his films, the last one being "Cuts Right Over", all of those experiences worked out great. This time, Matt and myself agreed to co-direct this film...but let me be the one to say, It's tougher than I could have imagined to act, direct and worry about the entire production end including things like food for the crew, remembering props or even simple clean up...every little thing. Matt is doing so good, he is prepared and always asks my opinion, even though, I'm sure he knows what looks great. Perfect professional, I really see big things for him. The crew we have is absolutely fantastic, always there when you need them...so giving. I couldn't ask for anything better. Love them all!

I'm convinced, after waking up with blue eye liner on my eyes, the smell of frosting in my nose and the stress factor looming over my head all means we are doing the right things. Next day we shoot is Sept 9th, that day is completely a full day of shooting, from sex, to death to a fight. Kim makes her way on set, plus Corino makes his acting debut..I'm so excited for that day. It will be draining but after its done, it will be great to look back and feel the same as I do today.

You can still help fund the project at www.NoClowningAround.com and also follow the progress on Twitter RobDimension - "Come to Daddy!!"
Posted by Rob Dimension at 5:42 AM