Dimension to appear at Monster-Mania as "Mumbles the Clown" THIS Friday!!

Dimension to appear at Monster-Mania as
"Mumbles the Clown" THIS Friday!! 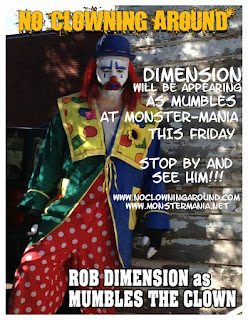 This coming Friday, in Hunt Valley, MD, "Mumbles the Clown" will be in attendance at Monster-Mania Con. Star of the Independent Horror/Drama film "No Clowning Around", Rob Dimension has stated "I will be Mumbles on Friday only, to help promote the movie." In addition to Dimension, Kim Dimension, the co-star will also be at Dimension's table. Co-Director Matthew Burd has stated also "I want to gather some additional footage of Rob as Mumbles for the extras on the Dvd". So, come see the crew and possibly be featured on the No Clowning Around dvd, that's scheduled for a December release.

In more exciting news, Burd added "We will also be premiering the trailer at Monster-Mania!" Dimension, who typically hosts a majority of the Q&A's in Hunt Valley will be on hand at the convention both Friday and Saturday, but will only be set up on Friday. All merchandise will be available at the con, including t-shirts, posters, 8x10's and Official Mumbles the Clown Fan Club cards.﻿


Next week, we will have information as too where the trailer will be shown on the big screen. So stay tuned....and could there be a "No Clowning Around" sequel on tap to shoot in the Spring??