Last night while watching Raw, I tweeted about John Cena and was amazed by the negative response. I was inspired to write today, for some it might give you a different opinion, for others, it will spark more hate.


Being in the Professional Wrestling business is a blessing and at times it makes you crazy. I'm on my way out, I'm over the hill and its a young man's sport. When you first get in, you're amazed...the sights, the sounds, the pop or heat you get when you walk through the curtain. It's a high...seriously. I can remember feeling it for days after something special happens.

Sadly, you quickly are turned into being a piece of paper that people tear from all sides. Many times, we remain silent when we see things that people don't understand or are quick to complain about. Which brings me to John Cena...ah yes, the man who carries the WWE and yet gets shit on by the common man. Many can argue my thoughts and theories but if you open your mind and stop worrying about the nonsense, you will enjoy the show much, much more. ﻿

*  The common complaint from the fans is - "John Cena is superman..he never loses!" Ok, lets take a look at that statement. John Cena sell more merchandise than ANYONE in the WWE. An insider told me how much money he brings in on his likeness alone, which was staggering. Cena is the flagship of WWE, much like a Hulk Hogan was...it's hard to find someone with that much charisma to carry a company, seriously. John Cena also is an ambassador for Make a Wish and Special Needs kids, World Wide. He single handly is responsible for granting over 300 wishes for sick and dying kids. WWE has millions invested in Cena, why destroy someone who does so much? 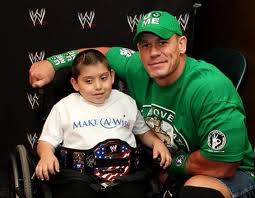 Also, after a year of build up...John Cena LOSES to the Rock on WWE biggest stage, Wrestlemania. He loses clean to an actor. Which, might I point out, that you also complained about. No one expected Cena to get beat by the Rock, who we all know is a part time player in the company and WILL be back in the title picture come Wrestlemania again, and chances are..you'll complain about that too. 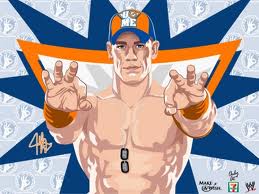 * Next complaint - "John Cena should never have beaten Brock!". Ok, think about this for a minute, if Lesnar beats Cena...then who does Brock face?? Who else would stop him? Punk? I love Punk but, seriously, Punk gives up 60 pounds easily to Lesnar. Plus, don't you enjoy the "Best in the World" programs that Punk did with Daniel Bryan? Guess what, Lesnar faces Punk, he kills all of that...the Punk momentun train stops instantly and then you have a UFC proving to everyone that Wrestling is a big work and wrestlers are less superior than UFC...way to go arm chair bookers. Way to destroy the company.

Instead Lesnar goes with HHH and neither lose steam. In fact, the program with HHH made him look stronger! Cena floats in and out of the title picture but continues to support the CM Punk angle. I think, Cena is used perfect. He creates PPV buys, sells merchandise and puts guys over.

* Last complaint - "Does Cena have to headline ever PPV?" As you can see above, there is a reason why he headlines PPV's...he sells tickets. WWE is a business...and more importantly, an Entertainment business! Their goal is too make money...to continue to stay in business so that you have something to complain about every Monday night. More often than not, the people who complain the loudest are the same wrestling fans who stream the PPV's, don't buy and merchaindise and wait for the latest DVD set to end up on Netflix. 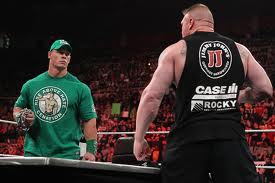 Until someone else steps up to take over the WWE, John Cena is your Captain...you can sit and enjoy yourself or sit and bitch. When I see Cena roll out of the ring to go hug a special needs kid, that too me equals class. Remember, you watch an invisible kid each week get fist bumped and actually get hurt...you watch a psycho twenty something as the GM of RAW. You watch Mae Youngs Hand on the 1000th episode (I know I laughed) and you complain about "It's not real?"

Just my opinion. Now, I'm gonna go buy myself a John Cena shirt and support the cause. He's steering the ship and I'm on board. My name is Rob Dimension and I have Risen Above Hate.
Posted by Rob Dimension at 9:31 AM