After an amazing weekend at Monster-Mania Con, I was finally able to start going through my swag, merch and assorted goodies. Now, I've always been a "toy guy", collecting and selling all kinds, from Star Wars to Horror action figures. NECA kind of took over for McFarlane in the Horror toy department several years ago. The great thing is NECA seems to care...A LOT. 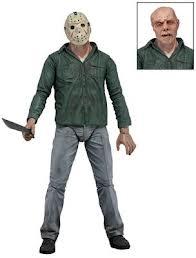 As I sat, scanning the loot, I decided it's time to be an "opener" and crack open the Friday the 13th Jason figure, modeled after Part 3. The packaging is colorful and is the sealed clamshell type which is impossible too open, but I'm assuming it's keeping Jason in (for OUR protection of course).

After I grab some scissors, it's time to crack this killer open! One twist-tie and Jason is out.

This Jason might have more meaning to me, as I remember seeing Friday the 13th Part 3 in theaters back in the early 80's. It was my first real experience for 3-D films. I always though Richard Brooker always did a decent job as everyone's confused, deformed, mongoloid summer camper, but that's my opinion.

Ok, let's discuss the "Facts of the Figure" - The figure stands approx 7 inches tall. with decent articulation. Knees and arms bend, plus the shoulders swivel. The figure is available in two models - The Regular and the Battle Damaged versions. Neither seem too be rarer as of yet, but I grabbed the "Clean" version...but now after opening, I realize I need both version. The Clean version comes with a Spear Gun and Machete accessories, while the Battle Damaged version comes with an Axe and the Machete. 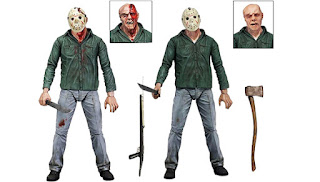 The paint job is excellent, as Jason is sporting some 80's style stone washed jeans...haha..ok, maybe that's me wishing. Anyways, his paint scheme seems to be spot on in comparison to the film. His posture is what really got me, as they captured his hunched shoulders fantastic, It really resembles him. The biggest benefit, as the pictures show, his mask is removable! I've had problems in the past with removable masks, especially Jason's, since the straps on the hockey mask tend to break...but so far, so good.

I would give this figure an A. It was an instant winner for me. It looks great, poses and stands very easily and is a keeper. I will say, for me, this is an opener. I don't think you can really enjoy the detail or sculpting unless Jason is out free...roaming your toy shelf, looking for pre-martial sex havers!!

If you would like to purchase these figures, our any of the other NECA Horror Figure line, please visit my friend Kevin at House of Mysterious Secrets. Kevin is top notch retailer and has extremely competitive prices.

Posted by Rob Dimension at 5:04 AM