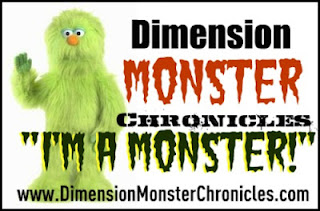 Filming this weekend, Dimension Monster Chronicles will be something a little new and kind of the same. Yeah, confusing right? Kim and Rob Dimension, the couple who, last year began a new type of review show. Tired of the same old, basic, guy in front of a camera review, they started using puppets, humor, clips and showing their "unique" love for each other in the process. Getting some attention, the couple decided it's time to work a little harder this time around...but, with a twist.

Rob had an idea (we know, very rare) to change things up a bit...what if...Dimension was a Monster dealing with Monster issues, while still reviewing movies and products? At the same time, while dealing with trying to become human again and trying to get along with Hack and Danny Pickle..this could be fun. If anything spells fun, it's puppets....or maybe it's a creepy thing, either way, the couple is excited.

Rob, who voices all the puppets, plus writes, edits and directs the process had this too say; "I love working with Kim, we had gotten some good reviews for our reviews..haha...and I figured I could step back a little and work on producing a fun concept. She has a dry sense of humor and gets where the joke is going. We want to create an awareness of what people might be missing, or simple forgot about." When asking Kim, she says "I'm not an actress..I just do this to have fun and I've fallen in love with some of these puppets personalities, especially Danny Pickle. He's such a Momma's boy, I forget that Rob is behind it...I have so much fun."

That sums up the project, as the key word is FUN. Rob closed with this "I think it's safe too say, we won't win any awards, we will be thankful to those who tune in and watch, even if it's just us. The episodes will have run times of 3-10 minutes, based on what we are talking about or doing....we also have a Villain that will make his presence known."

Right now, stay tuned to http://www.robdimension.com/ until we launch http://www.dimensionmonsterchronicles.com/ within the next few weeks. The episodes will be every few weeks...we look forward to seeing you guys!
Posted by Rob Dimension at 1:09 PM