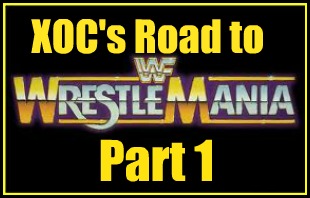 XOC Podcast #20
"Road to WrestleMania Part1"
The Extreme Odd Couple Podcast w/Steve Corino & Rob Dimension
It's Wrestlemania time and the guys are celebrating their 20th episode!! This was originally going to be one long episode, but it's broken up to keep our weekly schedule without missing a week (while Corino is touring the UK).
On this weeks show, Rob Dimension and Steve Corino talk everything from Japan's Tsunami Anniversary, being prepared for the end of days. Plus, Phillies baseball and Corino's fantasy league...Bowling gets a cheap pop and competitive eating...so much, so little time.
Join us on our road to Wrestlemania!!
Don't forget - visit http://www.xocpodcast.com/ to grab some #XOCPodcast T shirts, also http://www.worldofcorino.com/ and http://www.robdimension.com/ - also follow us on Twitter at @stevecorino, @RobDimension and @XOCProducer to get involved with the show!!

Posted by Rob Dimension at 7:10 AM