Phantom Menace in 3D - Was my mind blown or was Uncle George blowing smoke? 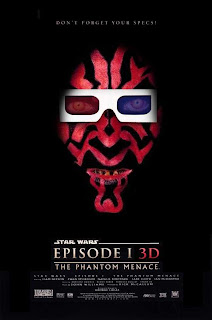 Now, we all know that The Phantom menace was a turd of a film in relation to the Star Wars universe, probably the worst of the 6. Darth Maul was marked as one of the most bad ass villains in Cinema history only to die a quick death with less than 10 minutes of screen time...yes, I know, very frustrating.
Without going into a review of the movie, because if you haven't already seen this...chances are you won't anyways. I would rather focus on the amazing 3-D effects that I would be looking forward too. Knowing how Lucas Arts is an innovator, knowing that good ole George would have something special up his sleeve for this, just to hook all of us nerds in for more merchandise and future releases...and knowing that my hopes are high as I've defended this release and looked forward too it...Uncle George wouldn't let me or the rest of us Lucas fanboys down...would he???
I went in with every intention of being in awe, with a complete open mind. Regardless of how bad Jake Lloyd was (even in High Def) I was going to enjoy the chills during the opening crawl and be wow'd like never before!! Well, I wasn't. Let me state this...the quality of picture was amazing. You could not ask for a better transfer to screen than what you get. Every detail sticks out, every background character has a face and we see everything with amazing depth. The 3-D effects just were lackluster. 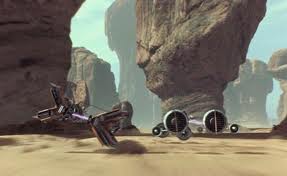 Sure, I know that this wasn't "shot in 3-D" but come on Mr Lucas, you Sir, are on top of the world with Technology, you are cutting edge...you Sir are the creator and reason why movie magic is so epic. I was expecting to duck during the podrace scene, I was expecting to need oxygen during the space battles...I was expecting to be able to punch Jar Jar but in the end....I simply felt that I watched a Blu Ray version of the movie. It looks amazing, just not amazing 3-D.
My son, @BroccoliRob11, who wasn't born when this film came out, yet has seen this film at least 40 times was my theater pal for the day. When he was younger, he enjoyed Jar Jar, in fact...while everyone hates Bink, I noticed that the kids still laugh at him. I often have to step back and say to myself "I feel in love with Star Wars when I was 8yrs old. George Lucas doesn't make these for me, he makes them for the kids". 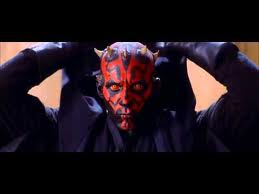 In closing, let me say this...I will continue to support George Lucas. I am a Star Wars junkie, I have been since 1977. I've seen every release in the theaters, I've even seen most opening night. I've shared this special Star Wars bond with my Wife, my kids, my friends and many, many strangers. I will always love Star Wars and I encourage people...if you love it, then love it, if not..that's cool too. It was great to take my son today, it's memory I will always cherish and I know he will too. And to George Lucas...Thank you for what you have given so many of us (even though you're a greedy, money hungry bitch)