Groundhog Day - How long was the Time Loop?

Groundhog Day
How long was the Time Loop? 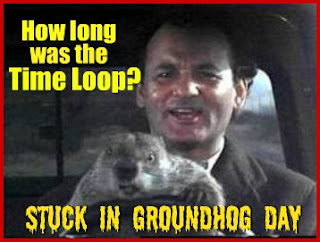 As I sit and look for something to watch, Groundhog Day pops up. A fun, fantastic film that everyone enjoys. When others discuss time travel in relation to Back to the Future, the time parodox discussion often passes over Groundhog Day...not any more.
A cult classic comedy/drama starring former Saturday Night Live Alumi, comedic icon Bill Murray. In the film, Murray plays Phil Connor's, a disgruntled weatherman sent to Puxatony, PA to cover the Groundhog Day festivities. Unfortunately, Phil is forced to relive the same day, getting stuck in a time loop.....but for exactly how long?
First, let's get to know the term Time Loop - Used mostly as a plot device in Science Fiction (Doctor Who and Tru Calling used Time Loops), creating a reoccurence/restart in time, after a few hours or maybe a day (as used in Groundhog Day) with most losing memory of what happened. In Groundhog Day, everyone surrounding Phil Connor's had no retention of the previous day's events. This allowed him to basically have free reign....learning skills, re-watching events and even cheating death.
Director Harold Ramis, on the Dvd commentary, estimated the time loop as "about 10 years", then after an article on Wolf Gnards added to the discussion, Ramis came back with a follow up statement of 8 Years, 8 Months and 16 Days. I should also add, the number 10,000 years has been thrown around by Ramis also, but that seems too farfetched. Can I accept that amount? Is it possible Phil Connor's could learn to play the piano, become a master ice sculptor and become fluent in French in just over 8 years?..........Let's look.
Rules I am using for calculation - Once a skill is learned, in order to maintain that skill, Phil would have to work approx 1 hour per day to maintain said skill. While he wakes up everyday, everything is restarted, his past day experience is NOT. He would still recollect everything from the prior day (not like 50 First Dates). If Phil makes a passing comment about something, I will take his comment into account. There will be plenty of days where I think his focus was geared to one particular accomplishment.
In the film itself, there are 36-38 days depicted, depending if some of the same events occured on the same day. A slap could have occured the same day as a Ned Ryerson interaction happened. It's not like he restart as soon as his day went array, he was forced to live the day, with each day starting at 6am. +38 days
Let's look at his events:
Suicide - Phil attempted suicide at least 7 times, as he was quoted "I have been stabbed, shot, poisoned, frozen, hung, electrocuted, and burned." So who know's how much more creative Phil was during his darkest days. I'm going to round up to 10 days of Suicide. +10 days
Piano Playing Expert - It shows Phil going for Piano lessons, paying for time, but the exact amount of time was never determined. Let's say Phil had 0 piano experience, which seems logical. After doing some research, piano playing is based on Grades (Levels). The rough guess is to play Beethoven from scratch would be roughly 7-10 years. Let's figure Phil played 4-5 hours per day to learn (it would be based around how much money the instructor required to put in a full day of lessons), so I feel comfortable with roughly guessing with Phil became a master player in 5 years. Now, this assumption is that Phil learned more than just one song, he strived to achieve. - +5 years 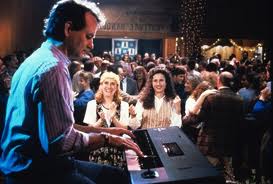 Throwing Playing Cards Expert - Phil makes a passing comment to Rita, that to become an expert at throwing playing cards into a hat would take - “Six months. Four to five hours a day, and you’d be an expert.” So, I'm assuming that this was the highlight of Phils day, not worrying about much else. I might even say this occured during the "Connor Dark Days" of self loathing and depression. -  +6 months
Ice Sculpting - This one is tricky. To become an expert in anything is tough, to Ice Sculpt is even harder. The guess would be 10,000 hours, based on experts recolection of time spent to master the art. So, let's say Phil was able to deal with the cold, and he spent 3 hours per day learning his new found art, and he went to learn everyday, in a row, with no skipping, it would account for 3,333 days in a row. So, let's call a safe number at 9 years, 6 months to round off the days. -
+9 years & 6 months
Speaking Fluent French - Connor's also in the film has learned fluent French. As seen, he recites a French poem flawlessly and Ramis has also said that Connor's learned the language. I took 2 years of Spanish for 2o minutes a day, 5 days a week, for 2 years and couldn't say shit in Spanish...so let'e look at how long Phil would need to become fluent. Ok, thanks to google...I found out the following : 1.Your age - the younger you are when you start, the better

2.Your aptitude for language - some people are just better at language than others

3.The effort you put into learning - if you practice every day you'll learn and remember a lot more than someone who goes to class once a week but never practices outside of class
﻿I'm also going to assume..haha...that Puxatony is NOT Francophone country..so we will go with the latter. I am sticking with approx 8 years. Again, I'm basing this on Phil only dedicating a few hours per day, possibly working on other skills or finding a new way to impress Rita. +8 years
Now, there will be many additional days that could go unaccounted, how many days does he care for the Homeless man? He does refer to him as Dad, so was a bond made over time? I will say yes, we see at least 3 instances of them spending seperate occasions together. I would say Phil spent at least 14 days working with the old man, bonding and trying to change the eventual outcome of death, which was unavoidable.
+14 days
The Movie Theater quote - Phil is seen dressed up, in what I think is a Spagetti Western outfit with a French Maid, where he see's Nancy, at the Alpine Theater to see Heidi 2 where he says "I've seen this 100's of times". Hundreds of times? Ok, so, Phil probably spent 200 days, my guess, at the movies. It would be something I would look into, if I were stuck.
+200 days 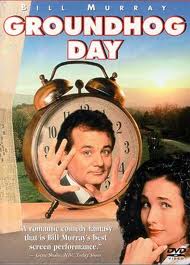 The Armored Car Robbery - Phil, who has every observation down, during this segment, has obviously spent many, many hours planning this heist. From the dog barking, the car passing, the roll of quarters to Felix dropping the coins...it's all there. How many days would it take to observe this? I even asked my Wife, just to get an outsiders opinion. She says "At least 30 days", this is picking one event in your day, learning the next 3 minutes of occurances where many factors fall into play. I will go one step further and add an additonal 15 days, bring the total to 45 days to pull off a flawless bank robbery. + 45 days
Lost time - Obviously, we have lost time that go unaccounted for, times where Phil was depressed and never left his bed, I'm sure Phil spent countless hours building a database of Rita's like's and dislikes. We also learn that Phil learn's the Heimlich maneuver, he learned the medicine including to be a Chiropractor. Connor's also built a repertoire with everyone in town, that no doubt, resulted in countless hours of research plus saving the falling child from the tree, "I save you everyday and never get a thank you". Granted, this is just an overview of the time spent in the time loop...with many variables. I feel this was an additonal 3 years.
+ 3 Years
My Final Estimation - 26 years & 308 days
Thats - 9,798 days
Or - 235,152 hours
This is just a simple, non mathmatical method for a geek to enjoy Groundhog Day a little more. Hopefully, you enjoy this day and remember "I sure as heckfire remember you"...I love Ned Ryerson!
You can watch Groundhog Day FREE on Crackle
http://www.crackle.com/c/Groundhog_Day/Groundhog_Day/2460089
Posted by Rob Dimension at 8:07 AM