The New Kids - It's NOT just Friday for Sean!

The New Kids
(It's NOT just Friday for Sean) 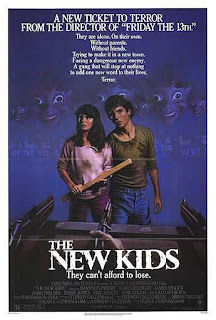 Most people instantly think of Friday the 13th ﻿when you mention Sean S. Cunningham, BUT he is just so much more than that. I have been on a bit of Cunningham kick as of late recently watching some of his other 80's efforts.
Now, growing up as a product of the 80's, witnessing films like Porky's, Hardbodies and My Tutor take over the late night airwaves. One of Cunningham's films, "Spring Break" was always one of my favorites. Sure, it won't win any awards but dammit, as for a skin, summer, fun flick...I actually like it. I will look at Spring Break another time, cause for me, a film like that requires it's own review...haha...I know, "Come on Dimension!!"
This morning, waking up early, flicking through Crackle (if you don't visit Crackle.com, you should..it's FREE and has BOTH of these films on it plus a HUGE Godzilla selection) I decided to watch "The New Kids" that was another Sean S. Cunningham outing in 1984/85. 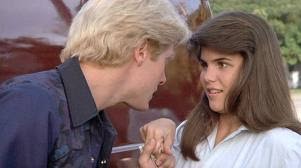 The New Kids is not just another run of the mill...new kids come to town, then get bullied..followed by revenge flick...ok, it kind of is BUT..let's first look at the cast. James Spader, whom has been thrust back into the spotlight by guest starring as Robert California on The Office. Plus, Lori Loughlin, yes..pre-Full House with her amazing feathered hair...it is really sick, plus Lori was in one of my favorite films ever - RAD! John Philbin, who many know from Return of the Living Dead (Amazing) but was also "Turtle" in another one of my favorites..North Shore. Tom Atkins is briefly in this one..but still gives it some street cred for me. 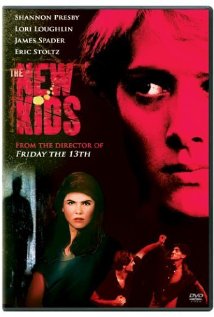 The story, cut and dry...brother and sister are Army brats, their parents die, they move to Florida, soon to be opening "Fun Land" amusement park, where they get bullied. Things get out of control, a bloodbath ensues. James Spader plays the bully, Eddie Dutra, who is a scumbag, not on the scale of Matt Dillion as Moody from My Bodyguard, but still a scumbag and apparently an Albino (weird). Philbin plays one of his sidekicks and does a great job. Lori Loughlin does her best to keep her hair looking good....something about her, it oozes sexy (....ok, sorry). The film is a bit better than most, but still not a must see. I recommend this based on it's free to watch.
The standout features - You can tell Cunningham was coming into his own with this one. His use of subtle music was great. His lighting and camera angles were used great to build some drama or even showing typical. life. (oh yeah...I notice these things..haha). A lot of quick cuts to hide the lack of special effects on some of the kill scenes. he does use a few uneasy spots with some animal killings...never easy to watch. I was pleasantly surprised to rewatch this one and enjoy it. It's a bit gritty....it has a few lows but worth checking out. Judging by the poster art, it's possible to be fooled by thinking it would be more brutal than it is.
My overall rating - This is a rental. If you watch it and like it, then buy it. I don't know how often, even though it's currently free to watch, I will revist it.
Watch it Here - http://www.youtube.com/movie?v=SFAtDIT2L94&feature=mv_sr
Posted by Rob Dimension at 4:20 AM