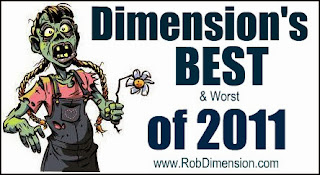 As we close in on 2012, I wanted to highlight some of my favorite films plus, additional highs and lows of this past year. I'm not asking for votes, no write in ballots...it's just one, simple man's opinion, who sits around and watches a lot of Tv and movies. Not very detailed, not even tons of catergories, just what I want to cover.
Best Box Set 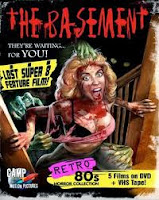 The Basement - I really lead the promotion for this release by Alternative Cinema. Clearly listening to the fans, embracing the VHS resurgence and releasing The Basement in big box format both on VHS and Dvd. You recieve 5 films, including shot on super 8, The Basement feature plus Classic Shot on Video features : Captives, Video Violence,Video Violence 2  and Cannibal Campout. This sits, proudly displayed on my shelf (with my other VHS) and looks tremendous. This box set retails for $25 and is well worth the money. If anything can be learned from the huge success of this release...VHS is not dead. 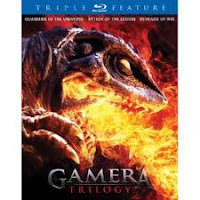 Runner Up - Gamera Blu Ray Trilogy set - Being the HUGE Kaiju fan that I am, this Blu Ray set was a can NOT lose. Ordering this set from Amazon for the extremely low $13.00 for all 3 Blu Ray's was an absolute steal. Featuring all of the "Modern" Gamera films..including Gamera 3, which may possibly be the BEST Kaiju film ever to be released. Clear picture, yet a bare bones release so to speak, but come on...for $13.00, what can you expect? If you're a fan of the Flying Turtle, get this set!!


Tv Show of the Year

The Walking Dead - over at AMC, hands down, the best Drama involving Horror on Tv. I mean after the ending of season 1, plus the release of Frank Darabont, I had my doubts. I loved Robert Kirkman’s comics and graphic novels, his style of writing made you care about the characters (a rarity). I know the Tv show doesn’t follow the comic but, get over it. I know the zombies aren't the main focus, but here is a little secret - The SURVIVORs are the real Walking Dead. The flashback sequences are giving us a better picture on the people, plus, who hasn't thought of "Shaning" someone to help yourself survive? I enjoyed the changes they made but this year…wow…week to week, great excitement. It had tons of discussion and after only 6 episodes, with 6 more to go..it looks like zombies are here to stay.

Biggest Letdown Show of the Year - The Office
I love this show, it might be my favorite sitcom EVER!! This season seems so lost without Steve Carrel, whom I really think made a big mistake by leaving but, that is my selfish opinion. Ed Helms is a good lead, but after watching Cedar Rapids, the movie he released this year with him as the lead, I'm wondering if he can carry the ball. Mindy Kaling, who plays Kelly on the show, and has written some fantastic episodes, seems busy with other projects. They brought in Ellie Kemper's (Erin) sister to write an episode, but the episode revolved around Erin, it’s like your brother is the booker and you are the champion. Dwight and Jim characters just seem too much of the same and their antics/pranks are less funny. James Spader brought in as Robert California just hasn’t amounted to anything. This pains me, I'm the guy who runs to buy the box set the day of release..Ive bought the game…I even thought of heading to Scranton to wander around…even though its completely fictious….Yes. I think it needs some new writers, with fresh ideas. But the writers need to know the characters…I really hope it can be saved but, like all shows, it might be time for Dunder Mifflin to close up and file for bankruptcy.
﻿Horror Movies of the Year

#3 - Hobo  with a Shotgun – available on Netflix Instant, just a gritty, over the top camp-fest. Hobo with a Shotgun makes me smile on every level. This is a great welcome back movie for Rutger Hauer....I always think of Blind Fury or the Hitcher when I think of Hauer, but this one is a winner. Trust me when I say, It’s not for everyone, but dammit, it's for me. What started off as a trailer, just took off and became an instant cult classic. The music, the use of color in scenes, the direction, gore and soundtrack make this a MUST see, especially if you were raised on Troma. Sometimes a Hobo needs to run around shooting people with a shotgun…especially if its all they know. Loved this one. #2 - The Woman – This one only had a small run in select theaters but gained instant recognition after several protests and boycotts, mainly from Sundance. The Woman by Lucky McKee, who I feel is going to really hit paydirt with K-Dirt (Ford Fairlane reference there...) soon and the Horror genre really needs it. McKee was the creator of cult hit, May also, that was a stand out feature a few years back. Co-written by Jack Ketchum, who is a writer that really reaches inside and twists your emotions, just watch The Girl Next Door, which is also on Netflix instant, for a complete mind screw and emotional roller coaster.
The Woman is the story that has many levels of depth. On the outside, it’s the story of a Husband/Father who stumbles upon a wild woman, while hunting and decides to help re-introduce her to society by trying to tame her. But, so much more is going on within his family circle. Great subtle soundtrack…very well shot…great acting and thought provoking story. This hits dvd in early 2012. 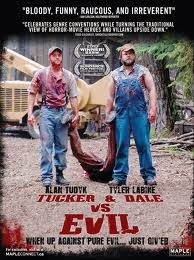 #1 - Tucker and Dale vs Evil – This was a late discovery for me. I had heard rumblings about this one, plus for me, personally, 2011 was a year of personal and professional growth. Tucker and Dale vs Evil really hits home for me. After finding this film, a few months ago, we discussed this on on Dimension's Horrible Podcast and tried to spread the awareness to as many as we could reach. Now, currently on Netflix Instant, this can and will be enjoyed by fans of both Horror and Comedy alike.
If I learned anything from my Hillbilly friends, I learned to never judge a book by it’s cover. The story follows Tucker and Dale, life long friends who are on their way to enjoy their newest purchase, a vacation home. Plenty of misfotune, coincidence and laughter follow these two guys. Campy, clever kills, fun dialogue and a bit of a twist ending eqaute in a must buy Dvd, Blu ray and Digital Download...yes, the Trifecta in Nerdism.
Well, that's my list...hopefully you enjoyed 2011 and here is hoping to a fantastic 2012. Personally, I could really use a great year. Happy New Year!!!
Posted by Rob Dimension at 6:35 AM

Email ThisBlogThis!Share to TwitterShare to FacebookShare to Pinterest
Labels: best of, gamera, horror movie review, jack ketchum, lucky mckee, shot on video, the basement, the office, The Walking Dead, the woman, Tucker and Dale vs Evil