Dimension shoots 300 on SNES...and so can YOU 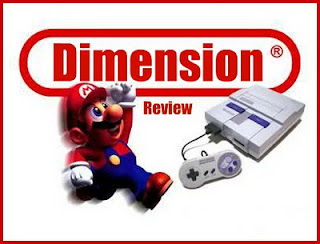 Brunswick World Tournament of Champions
Super Nintendo (1997)
Today I thought I would give you guys a review and tips to help you achieve your dreams of one day walking amongst the best in the Super Nintendo world elite. Now, understand, that you don't get a green jacket, there is no golden ring after achieving this amazing feat...but you will have bragging rights. After all, the best pick up line to a girl is "Hey, I can bowl 300 on the Super Nintendo Brunswick World Tournament of Champions Bowling game." 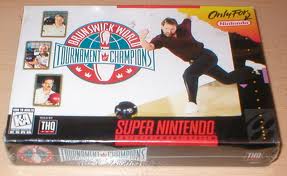 If you are a retro gamer, still own a Super Nintendo and possibly spent .89 cents on one of the last produced games for the system..then it's possible that you have felt your life was lacking the ability to score BIG. I'm here to help. The Brunswick World Tournament of Champions game, after researching online, has a bad reputation as a difficult game to become great on. Poor visual effects, complex hand/eye coordination controls and more useless knowledge than you can shake a bowling pin at.

Let's take a look at the set up. Simply by pass the bio's of the Professional Bowlers, sure Walter Ray Williams Jr. might be the winningest Bowler EVER on Tour and the greatest Horseshoe throwing champion in the World...he achievements in life pale in comparison to yours...so skip him and jump to player set up.﻿
I'm going to use the Right Handed bowler...because..well, I'm a right hander. One thing that peaks my interest almost immediately...the catchy soundtrack for this game (sarcasm). Give yourself a name...I will choose ROB. Off to a good start so far. Then when you scroll to Bowling Ball selection, go in and change your ball type to Quantum Midnight Blue. There are many Quantum's to choose from..but this one is Mine. 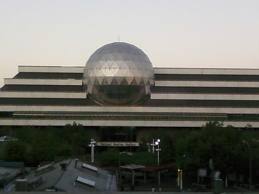 (Facts) When I worked at the National Bowling Stadium in Reno, NV, during its grand opening year (1995) I worked for Brunswick. The Quantum bowling balls were the 1st of there kind to have a retail of $200.00 each. One of my perks for working there was free equipment, I actually had a Midnight Blue Quantum. In reality, the Midnight Blue Quantum was designed for dryer conditions, being a "cover heavy" ball..meaning that the ball's inner core was lighter than the outer shell, delaying the early hook. The track flare was minimal due to this, opposed to the other Quantums. See, life imitating art.
Next is the weight, choose 15lbs. Then, simply click OKAY. For the spare ball, it doesn't matter, what color to choose, just make sure it is a PLASTIC ball. Now your Bowler should be set. Again, press OKAY. This game is so easy so far..huh? Go back to your Main page, then head to Practice...you need to practice before you can just go flauting your skills...I mean, Greatness isn't just handed to you!
Ok, now, the Oil Pattern you will choose is Easy to start with. I will show you how to get the BEST strike percentage using this skill level, after that...it's on you to mess around with (I'm like Yoda, I can't give away all the secrets). 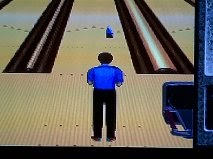 When stepping onto the lane, as you can see by the picture to the Left, stand with your Left foot on the Center dot. This represents the 20th board, basically you are in the center of the lane (A Lane has 40 boards across..it's actually 41 but that's a whole other nerd story). The arrow marker is just a pinch Left of the 2nd arrow. This represents the 10th board (the actually maker should be on about the 12th board), so we are playing 20 to 10 in Bowlers jargon. See, you are learning so much already. 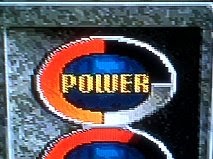 Now, the Power and Spin functions are where simple hand and Eye cooridination come into play. The goal with the Power is to stop it centered at 12 o'clock, like straight up. Imagine the Power meter is a clock, that way the 3-6 would be blocked off (The 6 o'clock is the starting point and the 3 o'clock is the max power.
As for the Spin control, you wan t to MAX the the spin power as much as possible. The more consistant you are with this combination, the more you will strike at will. This is only the basics, you will need to fine tune your skill and ability but someday, you to can walk into any Bowling Alley, with your head held high, your name on the back of your shirt and stand amongst the Elite! 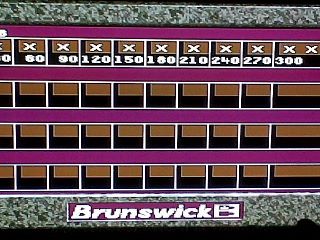 Here is the final result, yes folks, a 300 game. See you on the lanes! For more reviews...let me know, I would love to do some more silly little reviews for the Super Nintendo or even the Original Nintendo.
Follow me on Twitter @RobDimension or visit my site http://www.robdimension.com/ plus, listen to my podcast - The Extreme Odd Couple at http://www.xocpodcast.com/ with Steve Corino.
Posted by Rob Dimension at 7:34 AM