Bowling Game of the Week - Brunswick Pro Bowling for the PSP 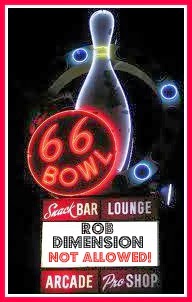 Brunswick Pro Bowling
PSP Handheld Console
Talk of the Week﻿
This past week, I switched from my Super Nintendo gaming system to the Playstation portable (PSP) system. I haven't had much use of this system, in fact...it's actually BrocolliRob11's PSP. Last week, my "Shooting 300" article/review" had HUGE views and was also carried by The press in Japan and Spain (..I know...crazy right?)
I made the decision to step out of the 16 bit world and jump into the 21st century. Normally, I can't grasp the updated systems...as I'm clearly not a Modern Warfare kinda guy...I do dabble in the World of Warcraft realm, but not too often to consider myself any kind of authority. 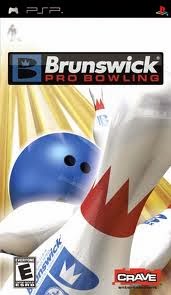 I packed up my family Dimension mobile with a trusty snack and visited to my local Game N Trade in Lansdale, PA. I invested a whopping $8 on a used copy of The Brunswick Pro Bowling game. Sure...$8 isn't a lot compared to the normal $60 price tags on games today, but remember, last week I spent $.89 cents on the Brunswick Tournament of Champions Bowling game for Super Nintendo...so that's like a 100 times price increase!!
Now, the release date of this game is August 2007, so again...I missed the big launch party!! That's ok, with a retail sticker price of $19.99, I doubt they were having cake and ice cream or even a midnight opening. I took a chance, sort of a blind buy on this one. Not researching at all and going with my gut (which seems to be growing due to too much Holiday eating) feeling, I was pleasantly surprised to say the least!
I don't want to give a final review yet, since I've only played for 4 days this far but, I already really like this game. It's been a while since I've had a game that I can't stop playing...and I mean...can't stop!! The game is a bit awkward to start but once you get going, you're set. 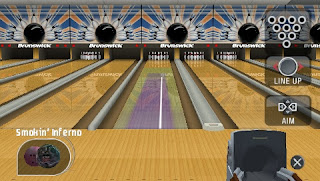 After half a day doing the "Quick Play", I opted for the "Career Mode"...I laced up my rented shoes, hopefully minus the foot fungus, grabbed my Alley ball and hit the lanes. When you start..you have 0 of anything...no money to buy better equipment, you lack arm strength and stamina and have poor accuracy. Don't let that detour you from taking down the punks who wanna bowl you. I wasn't scared, I took down a few less than credible opponent's but sometimes you need to take care of business. Without explaining "how to play" I will mention a few finer points.
Graphics - so far, great. The pin reaction and ball motion are realistic. The oil breakdown on the lanes, great. Everything looks great...when I started with the "House Ball", I seemed to do much better playing the 2nd arrow, with medium hook. Now, this doesn't always work. Sometimes the lanes are drier, making you move your feet, slow down your ball speed and hook the ball more. Other times, the oil is heavier, allowing you to play straighter (more direct) and increase your rev rate (Spin or Hook potential). Pin carry, as it plagues some of us in the real game, comes into play here. If your ball travels down the lane before it begins it's hook, you will see the EVIL 10 pin, plus, splits will rear their ugly head...but the bonus, most are makable! 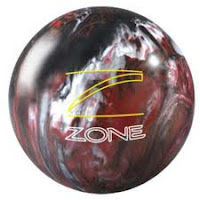 So far, I only lost 1 game in the 1st League session, finishing with a 35-1 record, averaging 215. Granted, not bad with a "House Ball", but after winning my 1st Tournament, I upgraded Bowling balls..to a Groove...terrible choice by the way. Way too much hook, was far to difficult to judge the break point and get the desired carry. With my extra money, I made another Ball choice...I went with the Target Zone, Red and Bone color (the Pic is the closest I could find to a match). This ball allowed me to continue my more direct line, similar to the House Ball, but had better pin carry.
Once I made this ball change..I instantly had better scores. Finishing out the 1st round of League games with back to back 300's. In techincal terms, if you're a bowler. I had very little head belly, stood on 14 and hit 8 at the arrows...<---- kind of like Geek Speak for Bowlers. This netted the best carry percentage and flush pocket hits. Granted, in "Real" bowling, a Target Zone is a spare ball or designed for a beginner, but for the sake of me living vicariously through this game..the Target Zone is great!! 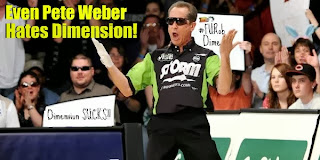 Today, I started a new League session and after my first 6 games of League...I'm dominating with a whopping 264 average. My high being a 289. I do float between the House Ball and the Target Zone depending on the oil pattern they have out. I seem to struggle during the Tournaments the most, as my opponenst get extremely lucky and improve as soon as the tournament starts. I for one, will be playing this during the Christmas vacation...but I know my Wife picked me up Tiger Woods The Masters for PS3...and I can NOT wait to play that game. Until next week...see you on the lanes...even if it's only virtual.
Posted by Rob Dimension at 10:56 AM