The Extreme Odd Couple Comedy Podcast #1
"...is this thing on?" 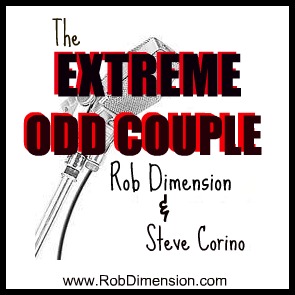 Rob Dimension is working up the nerve to make his journey into the World of Stand-Up Comedy. Being a life long fan of comedy, even having the chance to write some, Dimension has finally been pushed...but the pusher is none other than, Professional Wrestling star, Steve Corino (who is is also working in his own groove in Comedy).
On the 1st episode, Dimension and Corino discuss their bitter fued that runs ranpant on Twitter, where it started and where it will go. You also get a chance to become part of the nonsense. They also share their favorite tweets from the last 3 days.
This Podcast is not for everyone and don't worry, Dimension's Horrible Podcast isn't going anywhere, we just thought it might be fun to see where this train is heading...(probably going to wreck).

Podcast Powered By Podbean
Posted by Rob Dimension at 7:23 PM