My Weekend with Sally

My Weekend with Sally
by: Rob Dimension 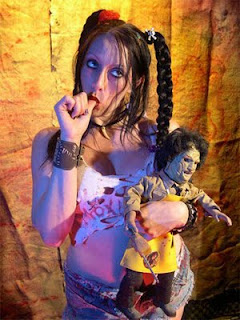 When you are asked, "Hey Rob, do you mind if we give you a Chainsaw enema?", what really, is the right response? My response, after being asked by Forbidden Pictures Head Mastermind, JimmyO, was simply...."Yes Sir".
Forbidden Pictures are the people behind the amazing popular web series, Chainsaw Sally, that stars JimmyO's lovely Wife, April Monique Burril as the lead. Sprinkle in people like Debbie Rochon and oh, lala we have ourselves some serious "too hot for TV" stuff. The Chainsaw Sally show is everything that Horror fans want and love...Blood, Boobs and fun.
Librarian by day, Sally sets out with her brother Ruby to rid the town of Portville of the scum....mix in some hot chicks, funny punch lines and an array of characters and you have this perfect blend! Now that I have been to Porterville, I can truly say it's like Disneyland for Horror geeks like myself! 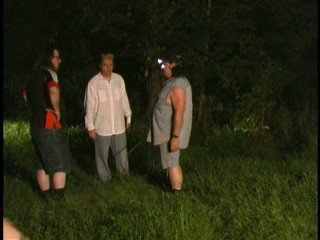 I was fortunate, I'm assuming due to JimmyO being extremely drunk one night, to be asked to be a cast member for Season 2 of the Chainsaw Sally Show. My character is Roving Reporter for the Baltimore News Team...Dirk Buttwise...yes, you read that correctly, Dirk Buttwise. Seeing the writing on the wall that I was going to be given a somewhat fun, goofy role, I was more than eager...then the "oh, by the way...Sally will be giving you a Chainsaw Enema" line shortly followed...after laughing out loud...I was all aboard for the craziness express.
So, without giving away every little detail...Dirk gets a bit too nosey and happens to be in the wrong place (the Woods) at the wrong time (when Sally is near) and next thing I know...I'm on the ground, Sally straddling me..while in a very un-manly way, I beg for forgiveness and simply think she should "let me go". Sally is not a big fan of Dirk...but likes his ass...well, in a  way where something is missing from it...A CHAINSAW!!! Poor Dirk dies in such unique way that Horror fans should really enjoy and will hopefully remember. 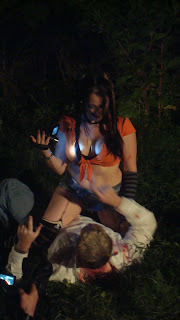 Back to reality, I figure since I just gave you a bit of a run down I wanted to talk more about the Behind the Scenes (yes..an ass Pun). At first the weekend was a bit in jeopardy due to an extreme heatwave the East Coast was dealing with, with a projected Heat Index of 115 we pushed things back to wait for the heat to break, even a bit. I got the call that production was moving forward, needless to say, I was very excited.
The heat by the time I arrived in Porterville was still a whooping 110 degrees, but I think everyone, even though we just sweat profusely, was happy with the final outcome. We arrive at the location, and I notice that the crew is stabbing at the wooded/High grass area...so I ask "what are you guys doing?", JimmyO quickly responds with "Checking for snakes"....I'm sorry..what?? After being consoled (I openly wept), April and myself went over our dialogue while the crew was blocking the shots...a few rehearsals and we were in the thick of the action.
Now, as excited as I was to have April, who was now sweaty and showing much cleavage sitting on my chest, keep in mind, her Husband is standing above me, it's 100+ degrees and I am still looking for snakes in my peripherals. Once the Special Effects came out...I could not help but smile. I have NEVER seen or (heard) so much blood on set EVER...from sprayers, to blood blasts, to guts, to anything that would be inside my ass was unleashed onto poor April. 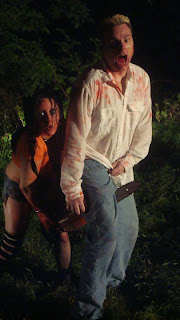 Let me say this - JimmyO, April and EVERYONE I worked with and met from the Forbidden Pictures Family was the best. I can't thank them all enough...they made me feel like a old friend this weekend. They constantly checked on me, made everyone feel at home and were just off the charts....and as far as I'm concerned...I am at their beckon call..seriously. I can not stress enough to people, these guys are serious about what they do, they care...they are not just talking about it..they are DOING it and getting results!!
chai
I am eager to hear what people have to say about little ole' Dirk Buttwise once the Season kicks off, which I believe will be sometime in August. This season has Debbie Rochon, Monique Dupree and plenty of other hotties...
Also, look for The Good Sisters and Silver Scream releases plus plenty of T Shirts, pictures and bumper stickers!!!
For more Info:
www.Forbiddenpictures.net
www.ChainsawSallyShow.com
Posted by Rob Dimension at 2:51 PM