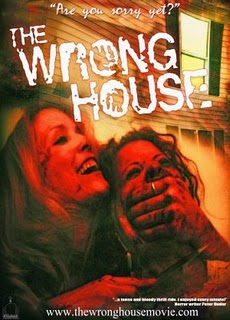 The Feature
Shawn French's: The Wrong House
Come enjoy this Independent Revenge film and join the discussion that follows. We will have give-a-aways that have been donated by Shawn French and Sue Stevens (the writers & stars of the film). Wanna buy The Wrong House? Click here
www.Thewronghousemovie.com
Additional Discussion
NAZI Zombies - we will be discussing the differences, what you like and don't like about Shock Waves (1977) and the (2009) Dead Snow (both are available on Netflix Instant view RIGHT NOW).
Everyone, this is what you have been asking for...a place to talk Horror and see stuff that you can't see anywhere else!!!

Special Guest - Ken Haeser - the co-creator of the Living Corpse Comic. Ken will be on hand to share in the fun PLUS.....if you spend $25 in the Capes and Cowls store..Ken will draw YOU as a ZOMBIE!!! For more info on Ken and the Living Corpse Comic, plus it's much needed return to Dynamite Comics, make sure you head over to
www.corpsecomic.com/
Special Additional Event - ZOMBIES!!!

Big Sal and Rob Dimension will be demoing the extremely fun, fast paced game by Twilight Creations, called Zombies!!! Anyone can play...get there early, we start the demo at 6pm. Want to know more? Visit http://www.twilightcreationsinc.com
Have any questions? Email Rob at RobDimension@msn.com
Posted by Rob Dimension at 11:26 AM