Dimension to Return to WORLD-1 this coming Sunday in Jackson, NJ? 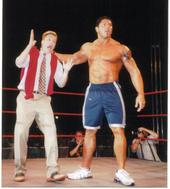 It's been quite some time since Rob Dimension has stepped into a Professional Wrestling ring anywhere. Fresh from the successful, but bloody set of "The Chainsaw Sally Show, Season 2" and gearing up for his next role along side Michael Madsen and Doug Bradley in Potent Media's "Deer Crossing", former Professional Wrestling Manager, Rob Dimension left a short, yet blunt message for Curt Lemon, relations manager for Pro Wrestling WORLD-1, stating "I have some unfinished business there!"
As some know, Dimension is a known trouble maker on the outside of the squared circle, Lemon had this too add "Things still smell like Dimension in this locker room..he is trouble and a loud mouth. Sly Stetson has been working for Dimension most recently and I can only imagine what they both could do to our company." While our calls to Dimension went unanswered, his agent did send us a very simple message "My client is less than happy with what he see's, you can read into that any way you want." 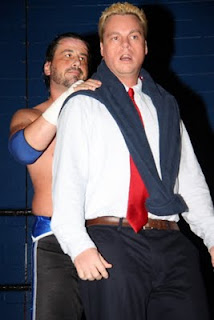 Steve Corino has been very quiet in this matter. While Corino and Dimension have had a very on again/off again friendship, I can only imagine that Corino is a bit worried that his son, Colby does face Rob Dimension Enterprises representatives, Sly Stetson's Andy "Right Leg" Ridge in addition to Bobby Dempsey which could easily be one of the younger Corino's biggest matches yet.
What does the future hold? Who can anyone trust these days? It all gets put on the line THIS SUNDAY:
JULY 31st
1pm!!!
Midnight Sensations Vs Extreme Horsemen
LIVE in Jackson NJ
401 Bartley Rd, Jackson NJ 1PM
Main event Tag team action!
Chris Rockwell and Sam Shields w/Richard P Guille Vs Ricky Landell and Steve Corino
Ricky Landell and Steve Corino, will team up for the first time as the Extreme Horsemen in nearly 4 years to take on arguably the greatest Tag Team in wrestling today, Chris Rockwell and Sam Shields!
U-30  Openweight title match
Bobby Dempsey Vs Colby Corino Vs Andy Ridge w/ Sly Stetson
Last month Andy “Right Leg” Ridge and Colby Corino took each other to the time limit, earning each wrestler a shot at Bobby Dempsey’s title! Dempsey took off last show, still recovering from his epic war with Ryan Sawyer. Is Dempsey back at 100%?
WORLD-1 Tag title match
Kid America/Lt Dan Vs Pelle Primeau and Mike Matixx
New Tag Team champions, Pelle Primeau and Mike Matixx, the very pro Canadian team, attacked Lt. Dan Gleason on June 12th for being a proud American. Kid America, who happened to be backstage visiting friends came out to defend the U.S.A as always. Will Canada reign supreme in this match or will the gold come back the the United States?
#1 contender for the WORLD-1 title series
Adam Cole Vs Alex Anthony
The path these two have traveled has been very similar over the last few shows. Both are former North American champions, and both took WORLD-1 champion, Chris Rockwell to the limit. Many feel that one of these two men, will be the one to take down Chris Rockwell and end the long reign of Rockwell. The question is, which man will get that opportunity?
Plus more including!
First time battle!
Ahtu Vs Amaris
First time battle!
Gran Akuma Vs Hellspawn

#1 contender for the Tag Team titles
Reiko GPS Vs Special Forces
Anyone who pre-orders kids tickets to this event will recieve a FREE Ricky Landell 8×10 SIGNED! General admission Tickets are only $10 for adults and $5 for kids 12 and under!
Posted by Rob Dimension at 10:14 AM