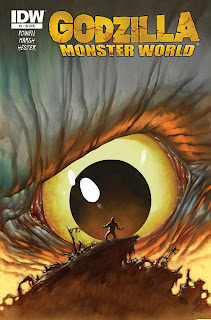 Originally, I set out to write about Issue #1, but having the first 2 issues within my grasp, I decided to go for the “Dimension’s City Stomping Double Issue Godzilla Review”…ok, maybe I should rethink the title…not exactly a winner.
I am a HUGE Godzilla nerd, in fact, I’m a HUGE Daikaiju (Giant Monster) film nut, I always have been. In order to not show how obsessed I really am, let’s just talk Godzilla comics. Now, for years Godzilla has found a home in comics through Marvel and Dark Horse comics…and quite honestly, in my opinion, they were never really that good. Being a fan of Godzilla, yes even sitting through the American version (insert moan and groan) and the Hanna Barbera "Godzooky" show, I always felt that just seeing Godzilla destroy cities and fight second rate foes was, underwhelming. The main reason, for me, at least was the lack of real, serious threatening Godzilla foes...like King Ghidorah, Mothra...even Rodan.
Dealing with TOHO has got to be tough, but somehow, IDW Publishing pulled it off. IDW Publishing, who I always think did the Angel series some justice but really did some amazing stuff with the Transformers series. Plus, they released 30 Days of Nights, GI Joe and a few others...visit http://www.idwpublishing.com/ for more info on all the titles! The newest Godzilla comic book series promises to be FULL our favorite Godzilla foe.
So let’s dive in to the review: 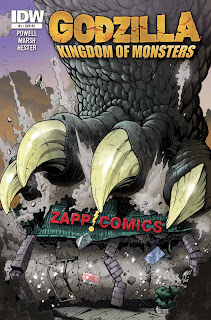 Godzilla – Kingdom of Monsters #1
Written by Eric Powell and Tracy Marsh
Artwork – Phil Hester
For the premier issue, IDW decided to reboot the Godzilla storyline that we are all so familiar with. I actually like this choice; it allows the writers to put certain twists on the Legend of Godzilla. So far we, for the 1st issue, see children being eaten (always brings a smile to my face…haha…my Therapist isn’t a fan), Japan dropping Nuclear weapons on the “Big G” causing Godzilla to now have Atomic breath and plenty of the line “You have got to be F&*King kidding me”.
Big fan so far…slow paced, the Godzilla (for other nerds wondering) is based on the Millennium Godzilla and his is drawn: Fierce. Like I said, so far so good…obviously the further we get into a story, the more we will see how the opening holds up.
Grade B+ - I really enjoyed the fast pace, the look of Godzilla and the surrounding story. The panic and the reboot I am really hopeful for.

Smart Moves!! - The Marketing by IDW for Issue #1 was amazing. They released an offer to retailers that, if the retailer purchased 500 copies of Issue #1, they would give that retailer an EXCLUSIVE variant cover with Godzilla squashing their retail location. Now, my opinion, the timing for this was great....they planned this around Free Comic Book Day allowing retailers, if they desired to hand these out as an advertisement. IDW in the process released over a Whopping 100 Variant covers!! Go collectors get those...haha..plus, IDW added to the print run of an additional 37,000 issues to be out there. Extremely smart marketing on IDW's part. I know, for a FACT, if I still had my retail store...I would have been all over this one! 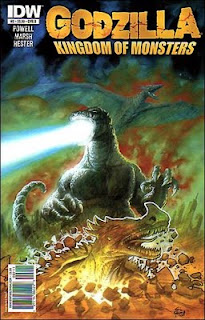 Issue #2
Ok, now we are getting somewhere...This issue we see Godzilla getting governments all over the world, very nervous...but that's not it...we also see the arrival of Rodan and Anguirus. Rodan is hatched out of an egg from a Russian museum and Anguirus rolls (literally) through Mexico! The story is more action based so far...we see a comical Father of the children from issue #1 becoming a human bomb, who launches himself at Godzilla...only to come off more like a small firecracker...Who else will show up?? How can they stop the Attack of the Monsters??? Gotta keep grabbing them to find out!
Grade B+ - if you are waiting for an A, keep waiting until we see some Monster on Monster destruction. So far so good...I would recommend it...but I think the story is gonna need to pick up shortly.
﻿

Posted by Rob Dimension at 1:32 PM