Dimension scheduled for Monster Mania in Baltimore next week

Rob Dimension announced to appear at Monster-Mania in Baltimore!

On Saturday, August June 4th, Rob Dimension was announced as a guest for the extremely popular Horror Convention, Monster-Mania in Baltimore. For all those expecting a major guest announcement, we apologize for the disappointment. Many even say "Who the hell is that?" 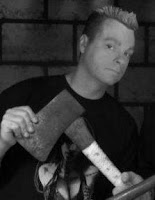 Rob Dimension who has over 10 years of being involved in Pro Wrestling as a manager, noteably as Steve Corino's sidekick in recent years, plus co-host of the popular Horror Hosting show, Late Night at the Horror Hotel and recently finished filming his co-staring role on the Horror/Comedy film, Demon Hunters, made it a point to say "I always laugh when they announce me as a guest. I can hear the crickets and moans as people see my name." It was also announced that Dimension will have a role in the upcoming season of the popular, Cult favorite, Chainsaw Sally show.
When asked what Dimension will be doing at the con, Dimension said "I will be hosting an event or two, Monster-mania is my home. I have attended since #2 and I am so proud to see them closing in on #20 soon, Dave does a trememndous job and puts on a GREAT convention experience. I will have a table for Saturday and plan on telling very bad jokes, selling inferior products and doing my best to alienate myself from the other guests." Anyone that knows Rob, knows that is probably the truth.