Come see Rob Dimension THIS Saturday at MonsterMania in NJ

This Saturday, March 12th, come meet Rob Dimension at Monster-Mania Con in Cherry Hill, NJ.  Formerly from Late Night at the Horror Hotel, who is now part of the Midnite Mausoleum TV show, Dimension will be wandering around aimlessly for the most part but will be stationed at The Living Corpse table with Ken Haeser and Buz Hasson. 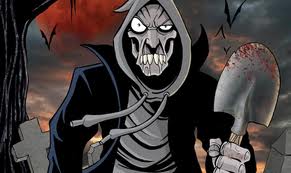 Make sure you ask Dimension about The Extreme Odd Couple web show co-starring Steve Corino and his current movie project - The Demon Hunters (currently filming). Plus, Dimension is scheduled to host a Q&A event at the convention. Stop by and see him.
Posted by Rob Dimension at 4:21 AM