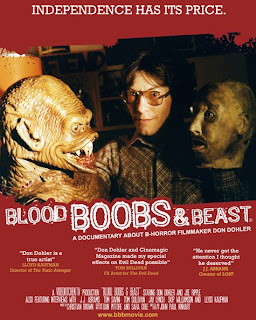 When involved in Horror film making people are often asked; "what's the key to a successful Horror film?" Well, the 3 B's come into play - Blood (which most Horror films have), Boobs (come on...what would 80's Horror be without it?) and Beast (I think of this more as a metaphor than actual, but a great Beast never hurt). Is that all that it takes? As seen in this inside look at life as a B-Movie film maker, you will quickly see the sacrifices made to follow a dream.
Don Dohler is a name you may have never heard of, but Dohler is an Icon to many. Making films like Alien Factor, Fiend, Blood Massacre, Vampire Sisters and Dead Hunt you begin to understand the journey that was made as a film maker.The Baltimore/DC area has some extremely talented people, from Famed Horror Host Count Gore DeVol (Dick Dyzel), film maker Kevin Kangas (Fear of Clowns), JimmyO Burril and wife April (Chainsaw Sally and Forbidden Pictures) whom I am sure, were influenced and/or worked with Dohler. The name that stood out for me on this documentary, personally was Joe Ripple.

Now, over this past summer I was honored to work with Kevin Kangas on the Garden of Hedon feature, during this time I was introduced to Joe. Honestly, I also felt I was on top of Independent features and films...little did I know I had just met an Icon. Joe was completely humble and simply taking pictures and enjoying being on the set.
With that being said, watching this film you see the partnership between Dohler and Ripple. How they deal with actors no showing on set, life off the set and even as Dohler was diagnosed with Brain and Lung Cancer you can truly see the friendship and bond.
John Kinhart, who sat through tons of hours of footage and interviews puts together a film that is more than just an inside look or behind the scenes...it was a celebration of the B Movie film maker. Interviews from Tom Savini to JJ Abrams set the mood for a real look at Don Dohler.
I really can not express how great this was for me to watch and enjoy. The fans who know the lines, word for word to features by Dohler that were made with no big budgets, not amazing effects...these were made for the love of making movies. I'm sure this write up doesn't do the film or legacy that Dohler created, justice but if this creates an awareness for anyone who wants to enjoy the fun in film...look for some of these films.
I also want to mention, looking back how great it was to be on set with someone who didn't feel like he had to make others aware of what he does or did. For that Joe Ripple, I thank you....you proved to me (without knowing it or trying), roughly 6 months later that you LOVE film. That's the inspiration..right there.

Posted by Rob Dimension at 8:58 AM