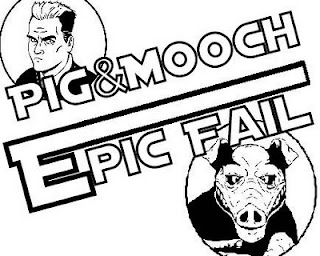 Pig and Mooch Podcast - "Epic Fail" launches in January﻿
Is it possible to self promote yourself anymore? Can Mooch (played by Rob Dimension) and Pigamortis (voiced by Sal Valente) whore themselves in any other forms of media? With NecroCOMICon TV getting ready to launch, the duo is under the impression that people want to hear more from them….well; maybe they are on to something......Enter - EPIC FAIL
What on Earth would a Mooch and Pig even discuss on EPIC FAIL?
They are glad you asked:
• Movie reviews – All kinds of Films (let them watch and review your film)
• Gaming – aspects of Gaming (from Dungeons & Dragons to Collectible Card games, even Video Games)
• Comics – from what titles they like and what they don’t like
• Opinions on Life – wow…really? We recommend not taking their Life lessons into consideration
• War on Words – known as part-time Cyber Bullies.... what will happen when they vent and let loose?
Dimension had this to say “It’s basically Nerd talk 101, except we are full of shit. Like all nerds, we are under the belief that our opinion matters, when in fact…it doesn’t. "We find some things funny, that others don’t…..so I am expecting a Train wreck”, Valente quickly added.
Kim Dimension who is a new character, Demonica on the NecroCOMICon show, added “Their sense of humor is warped and twisted. They have no filter.” “They enjoy pushing the envelope when they can. This will give people a better idea of what we (Kim and I) have to deal with when shooting the Tv/Web series" says Alicia Still, who works on production and helps with publicity.
When asking Valente on format for the podcast, we were greeted with this answer “We don’t really have a format, we are just gonna ramble and see what comes out”. Sounds like a well laid out plan…..ummm, not really. Look for this Train wreck available on www.NecroCOMIContv.com starting in January.
Posted by Rob Dimension at 3:24 PM