Chad Vader - Day Shift Manager
by : Rob Dimension﻿
All it takes sometimes, is a wake up call for you to realize that you gotta work harder to achieve great results. The guys over at Blame Society (www.BlameSociety.net) are using Star Wars and a little twist, to make that magic happen...man, I wish I had thought of that! Their hit web series "Chad Vader: Day Shift Manager", having finished the 3rd season is still garnering huge numbers in the view department. 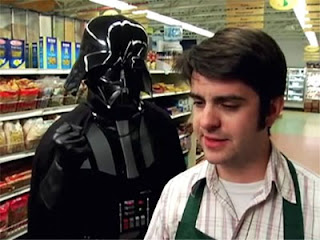 Haven't seen it yet?? What? Okay, lets give you a back story - Chad Vader is the day-shift manager at the fictional supermarket Empire Market, who clashes with his customers and employees. From the daily power struggle to simple dating are all covered by the brother of Darth. Filtering in lines from Star Wars, this should be a MUST SEE for any, even remote fan of the most famouds Trilogy EVER (and no I am NOT talking about Lord of the Rings). Showing that the bravery gene was given to his brother, Chad does step up and do his best to keep Empire Markets on top of the competition. 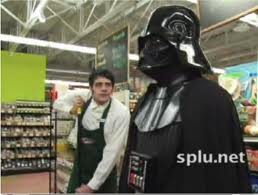 (Credit Wiki) Chad Vader (Aaron Yonda/voiced by Matt Sloan) is the show's central character. He is the day shift manager of Empire Market. Sometimes using lines lifted from the Star Wars films, Chad's main goal is to crush Empire Market's competition and help make the store dominate the food retailing industry. While he has inappropriate and rocky relationships with most of his co-workers, most notably Clintfield Chadton, he has better ones with others, such as Jeremy, whom he adopts. Chad implies in the second episode that his older brother is Darth Vader, and that Darth gave Chad a life support suit and helmet similar to his own after Chad accidentally rode his bicycle into a volcano. This fact is mentioned explicitly on the Blame Society website (www.blamesociety.net). Though he uses a red Sith lightsaber as a weapon to threaten opponents and shoplifters (mostly old ladies), he may not be a Sith; he is never referred to as "Darth", the title given to all members of the Sith order. He is, however, referred to as "Lord Vader" by some characters. Chad had lost touch with his family when they moved to Tatooine without him. Despite Sloan being a local comedian and voice actor, LucasArts was impressed by his Darth Vader impression, so after the lawsuit[citation needed], they got together with him. This led to him becoming the new voice actor for Darth Vader. His voice appears in the games Empire at War: Forces of Corruption, Soulcalibur IV, and Star Wars: The Force Unleashed. It is also noted that in Star Wars: The Force Unleashed, if the player kills 12 storm troopers, they will receive an achievement entitled "Worst Day shift Manager Ever". 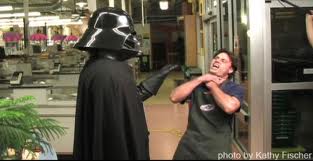 So, in closing...when you think that you are doing great with your show (looking into the mirror) you realize guys like Blame Society average 500,000 views and even grabbed over 10 million views for thier 1st episode....THAT is making people notice you.﻿ Take a minute and head over to the Chad Vader page - http://www.youtube.com/show/chadvader?s=2
For info on Chad Vader, the creators and some of Blame Society's other creations, visit:
Blame Society

Posted by Rob Dimension at 4:51 AM