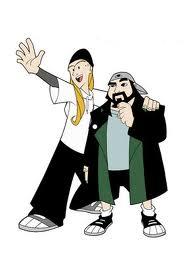 ﻿
Mooch takes a trip for Secret Stash.....in Red Bank NJ
by: Rob Dimension
For those that know me personally, I am a big time Kevin Smith fan. From his marketing, to his writing, his films and yes, even his acting...hey, not everyone can be Silent Bob. He is a nerd and I can relate, the passion he has for all things FanBoy, is just fantastic.
I load up the Moochmobile and head over to Red Bank, NJ for a much needed trip to Jay and Silent Bob's Secret Stash and since I knew I would be thirsty, I should stop at the Quick Stop. Both locations have grown a cult following having appeared in the Clerks films, Jay and Silent Bob Strikes Back and a few others (I don't need to run down the list cause you know them all). 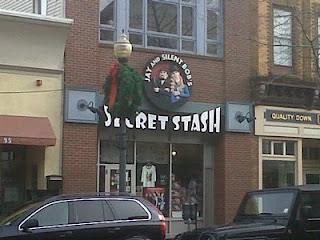 ﻿First stop ... Jay and Silent Bob's Secret Stash right in the heart of Red Bank, NJ. I live on the outskirts of Philly, so the ride for me was about 1hr and 20 mins. Not a bad ride, Turnpikes and Garden State Parkway, the latter being a huge rip off, but that's another story all together. Red Bank is a nice, clean little town. When you pull up, you will have to pay the meters to park. It runs a $1 per hour, so bring your quarters. 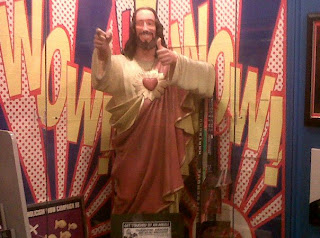 Let's face it, unless you live here, your not coming here to buy comics...your coming here to buy some View Askew swag and look at the memoriblia, well don't worry there is plenty! From the 5ft Buddy Christ (as seen above) to everything else like Silent Bob's coat, Clerks 2 outfits, a large Mooby and even the actual Quick Stop sign. Take your time and look around. They have done their best to lay everything out and there is plenty to see. 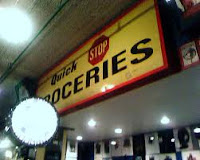 Me, being the big nerd for this stuff, just had a field day looking around and shopping. Since I enjoy comics, I loved the atmosphere at the Secret Stash.  If you want anything autograhed, never fear, there is TONS of stuff auto'd, from $4 comics by Smith to the inAction figures. Plus, a HUGE selection of t-shirts, sweatshirts and yes, you can buy you very own Mooby's employee shirt. The prices on everything are reasonable, most t-shirts run $20 and the sweatshirts run approx $40-50. What did I buy you ask? Well, I had noticed a figure on the site http://www.jayandsilentbob.com/ , the Night of the Living Kev inAction figure, so it was my quest...being a horror nerd, it made sense...plus, the bonus, it was signed....see below. Great place to stop and shop, if you can't make it, the website has tons of stuff and even offers discounts.

Next stop was the most know convenience store on the planet, the good ole Quick Stop that our favorite dealers, Jay and Silent Bob hang in front of. Plus, let's not forget the pure genuis that Dante and Randall pull off inside. Part of me was hoping to catch a glimpse of Leonardo Leonardo, but that wasn't gonna happen.
Traveling distance is about 15 minutes from the Secret Stash to the Quick Stop. The Quick Stop has changes colors, from the dirty white to now a sandy colored orange....must say, I wasn't a fan, but they are a business. The biggest part of the little mini strip mall (the building can actually house 4 businesses including the Quick Stop) is that everything is closed, excect for the Quick Stop.
The saddest part was seeing that RST Video is just a shell now. While the store still has TONS of videos..yes, videos sitting all over, it looks like it is used for storage now. The Quick Stop does have a few videos for sale, but at $5 each, unless they had a video nasty big box, I wasn't dropping a fin.
I did venture inside the Quick Stop, hoping to be greeted with a smart ass comment, see a guidance counselor testing eggs or even hear some Star Wars discussions happening...but, instead it was just some poor hapless joe doing his 9-5 job. No colorful characters hanging out front, no sheet hanging out front with "I assure you, were open" but I did have a smile on my face, just thinking about all the lines that have become a part of everyday life.....who hasn't thought "I'm not even supposed to be here today" 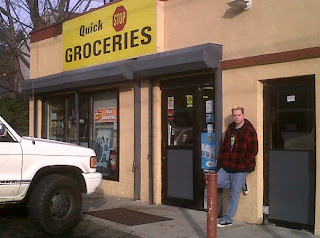 I still felt the trip was worth it and would HIGHLY recommend if you are a fan of these films, to make the trip....you will be glad you did. Plus, you never know what kind of rift raft, shady character you might see leaning outfront on the wall.
Posted by Rob Dimension at 7:52 AM