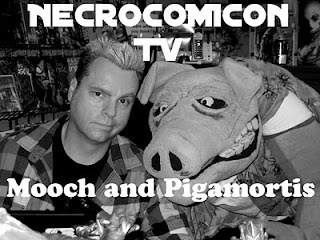 Mooch Minute 12/18/10
Famous Dungeons and Dragons Players List
As we gear up for our 1st Epic Fail Podcast, we had a great discussion about the Spokesperson for Dungeons and Dragons question we aske. Remember, if you were a non-player or even a player trying to recruit new players...who do YOU think would be the possible sway factor to get new players to play. Below is a list of Famous people that play D&D.
While the answer may not be someone famous, this is a great list of potentional front men or women.
(Credit to http://www.edmplanet.com/forum/showthread.php?t=86735 for this list)

1. Stephen Colbert (also went to Gen Con (a dnd/comic/roleplaying convention))
2. Vin Diesel (Wrote the introduction to a book about DnD)
3. Mike Myers
4. Dwayne Johnson AKA The Rock
5. Matt Groening
6. Dame Judy Dench (Introduced to the game by Vin Diesal)
7. Jenny McCarthy
8. -=Edited out cause I was wrong.=-
9. Edwin McCain (Not sure if he still does but did when he was a kid)
10. Wil Wheaton (played on the set of Star Trek: The Next Generation. Still plays to this day)
11. Daryl Hannah
12. Robin Williams (Plays both the Online DnD Game and the Tabletop one)
13. Lexa Doig AKA Rommie and the computer AI from Andromeda
14. Ben Aflac (Forced to play by Kevin Smith on a set once and fell in love. Prefers to play Wizards over fighters.)
15. Mat Damon (Forced to play by Kevin Smith on a set once and fell in love. Prefers to play Fighters over Wizards.)
16. Matthew Lillard (Said so on G4's attack of the show then stole all of thier D&D Minatures Models)
17. Jon Stewart (He also sneaks sutile D&D jokes into his show that only us D&D nerds get to laugh at.)
18. Jim Breuer
19. Brian Warner AKA Marilyn Manson
20. John Carmack and a good portion of the original id Software crew (Some of the characters and story elements in Quake were based off of D&D session iirc)
21. Sebastian Bengtsson
22. Joakim Bengtsson
23. Robert P. Olsson
24. Björn-Erik Karlsson
25. Daniel Antonsson
26. Tommy Karlsson
27. Kevin Smith (Can't I forgot him until now)
28. Eddie Izzard
29. Johnny Vaughn
30. Michael Greco
31. Dave Gorman
32. Charles Manson (He actually ran a game in prision! That is to say until California banned the running of Tabletop RPGs in prision.(This might actually be just a rumor but I don't mind))
33. Scott Edgar (Found the actual quotes! "I also play Dungeons and Dragons with my mates, which everyone reckons is tragic, but I reckon is heaps of fun.")
34. Jon Favreau (Another one with a quote! "I'm a very lazy person by nature. I have to be really engaged, and then I go straight from lazy to obsessive. I couldn't study chemistry, but I could memorize all the books for Dungeons and Dragons. It was ridiculous.")
35. Curt Schilling from, I think, the Red Sox or at least use to be.
36. Todd Pratt from, I think, the Braves or at least use to be.
37. Jimmy Wales (One of the starters of Wikipedia)
38. Jacques Villeneuve (Use to drive race cars. Ironicly he prefers to play Monks in D&D which move faster then all other characters)
39. Rivers Cuomo from Weezer and, it is rumored at least, the rest of the band.
40. Everyone in Marcy's Playground (They even wrote a song called "A Cloak of Elvenkind" Which is a Major Magical Item in Dungeons and Dragons)
41. Everyone in Flashlight Brown (They even wrote a song called "Ready to Roll" which references 20-Sided Dice and A LOT of other D&D related things)
42. Gary Gygax (He was famous enough to play a character on Futurama(himself) so I put him on the list)
43. Seth Greene (Even made a Robot Chicken episode that refenerced THAC0 which was part of the Advance DND (or 2nd Edition) rule set)
44. Trey Parker
45. Matt Stone
46. Patton Oswalt (even talked the Reno 911 guys into doing a DnD part on the show. It was very funny)
47. Stephen King (And certain things from dnd are referenced in The Dark Tower series)
48. Steve Rune Lundin AKA Steven Erikson
49. Joss Whedon (Director of Buffy The Vampire Slayer)
50. Jack Black (He also references DND in the song "Wonderboy")
The following people stole DnD stuff from the teen choice awards. I included pictures when I could find them:
51. Ryan Cabrera
52. Nick Cannon
53. Jon Heder
54. Jesse McCartney (http://i5.tinypic.com/477z19v.jpg)
55. David Boreanaz
56. Lauren Graham (http://i4.tinypic.com/2uhq1dk.jpg)
57. Hulk Hogan (http://i7.tinypic.com/2mzlevt.jpg)
58. Metallica (At least they played Call of Cthulhu and Dungeon and Dragons before Hetfield went into rehab)
59. Conan O'Brian (Use to play at least. He has mentioned it on his show)
60. Darby Conley (though he is C-List at best)
61. Andrew W.K.
62. The band Amon Amarth (Can I get a Wha wha from all my metalheads?)
63. My Chemical Romance (They played with Thrice during the Vans Warp Tour. My Chemical Romance's lead singer Gerard Way plays a Half-Elf Ranger)
64. Thrice (Played with My Chemical Romance during the Vans Warp Tour.)
65. Alice Cooper Played D&D (And even replayed the events of a game on an episode of That 70's Show)
66. Some/All of Barenaked Ladies
67. Raymond E Feist (He Actually uses a self created world in his books that was originally created for his Dungeons and Dragons game back home)
68. Kari Byron (Played DnD and has thought about getting Adam and Jaime to play with her.)
69. Brian Posehn
70. Jason Mewes (Though when asked about it he says "DND IS FOR FAGGOTS" then turns to Kevin Smith and starts laughing)
71. Robert Jordan (And his sons which he taught how to play)
72. Weird Al Yankovic
73. Mastodon's Drum Brann Dailor
74. Neil Fallon and MAYBE the other members of Clutch (They even wrote an unreleased song called 24 Earth Years which mentioned playing AD&D back in the day)
75. David X. Cohen (In David's piece in the 30 year D&D hardback book, he says he never had time to play during Futurama, but most the writers did, and they kept D&D books in the office as "referrence" material.(He did get to play while working on The Simpsons though))
76. Alexis Cruz (He also LARPs. HAHAHA Nerd)
77. David Cross (He also mentions a group of comedians he plays with but wouldnt name them.)
78. Billy Crystal (He also plays 40K With Robin Williams)
79. R.A. Salvatore (Though I guess he would have too)
80. Some of the members of Dragonforce (And DND themes have worked their way into Dragonforce songs over and over)
81. David Duchovney (actually mentioned it on Conan O'Brien not too long ago)
82. The band Dayglo Abortions (Even wrote a song about it called Dragons)
83. Donald Faison (He plays Monks)
84. Insane Clown Posse
85. Emilio Estévez
86. Glenn Danzig
﻿
Posted by Rob Dimension at 5:06 PM