LET ME IN: CROSSROADS #1 Comic Review 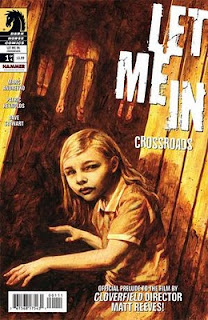 As anyone with any taste can tell you, LET THE RIGHT ONE IN is easily the best vampire movie of the last decade. I didn’t get a chance to see the American remake yet, but I’ve heard good things. LET ME IN: CROSSROADS is the official prelude to the American film. What causes young girl vamp Abby and her mysterious caretaker to set up shop in a new town at the beginning of the movie? Why does Abby’s budding friendship with a young boy raise a red flag for the caretaker? This comic series seeks to answer those questions, in a presumably horrific fashion.

One thing that I find so intriguing about Abby (her name is Eli in the novel and the original film) and her caretaker is the mystery surrounding them. She leaves little nuggets here and there about her history, but there are still so many questions. Who exactly IS the caretaker? What’s his relationship to her? Why does he commit such atrocious acts in order to protect her and provide for her? How was she “turned”? How did she get by before she met the caretaker? 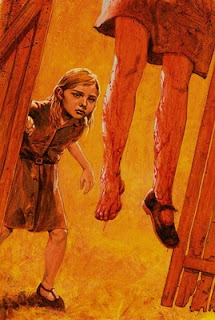 THAT’S what makes these characters so compelling. In this age of prequels and remakes that over-explain the origins of everyone from Wolverine to Willy Wonka (When it’s usually best left a secret), it’s refreshing to have characters that leave you wondering. Which is precisely WHY a prequel to this particular story is so alarming. My first thought was NOOOOO!!!! Don’t tell me any more about these characters! We know just enough to care about them and still by fascinated by them. Any more information will shatter the mystique, and that could ruin everything.

But, I’m happy to report that this new series from Dark Horse has no intention of shattering any mystique whatsoever. It’s merely an earlier chapter in the lives of Abby and her caretaker. A previous adventure, if you will. All the mystery is still there, the characters are simply in another setting, in a different situation. 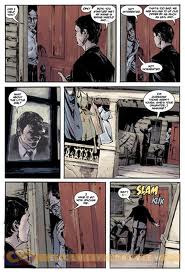 This time, instead of the frozen, snowy backdrops of the films, we get a dried-up dustbowl in the Midwest. Instead of teen bullies, the villains are a greedy real estate tycoon and his drunken mess of a son-in-law. Seems they want to build on Abby and her caretaker’s property, and are trying to force them to move out. I’m gonna go out on a limb here and say that I’m pretty sure they’re gonna end up dead. That’s the inherent problem with prequels. It’s kinda difficult to build up suspense when you already know that the protagonists can’t be killed off. And the villains here are such one-note douchebags that you know they’re going to meet with a gruesome fate. These kinds of guys never see the light and change their ways in horror films/comics. They’re just written to be so unrepentantly evil that when they finally get their bloody comeuppance, you’re cheering it on.

This is one of those monster stories where the protagonist may be a monster, but the regular humans are the REAL monsters. It’s a timeless theme, and I’m sure there are many creative interpretations of it yet to be seen.

Another captivating element to the story is the fact that Abby was turned at a very young age, and now she’s trapped in a child’s body forever. She’s been around for ages, but she’ll never know what it’s like to be treated as an adult. Even her only friend, the caretaker, takes a parental role in her life. That expands the dramatic possibilities here, and makes Abby an understandably melancholy and tragic figure.

So far, there’s nothing uniquely gripping about this new story, but the artwork is terrific, and as I’ve said, the characters continue to be untainted by too much backstory.

If you felt the films and novel said everything that needed to be said about Abby/Eli, then there’s really no reason to get this. BUT, if you found yourself enthralled with the character, and wish to support her rise as a potential multimedia horror icon and believe that she has many thrilling stories yet to be told, then get to your local comic shop, and pick this up!


When not hanging out at The Horror Hotel, Mark Mackner can be found creating such local indie horror gems as DAISY DERKINS: DOGSITTER OF THE DAMNED!, EVIL BREW, THE HALF-LIFE HORROR FROM HELL or: IRRADIATED SATAN ROCKS THE WORLD!, and EMBALMO!  He’s also the resident Spider-Man scholar over at geek site POPTARDS where he writes SPIDEY’S WEEKLY WEB-UP.  In 2011, he’ll be directing his latest original script PROM NIGHT ABORTION!