Let me start this off by letting all you readers know that I am not the biggest fan of the Saw franchise. That being said, I am a huge fan of everything horror and after being pushed into the theater by my wonderful fiancé, I decided to give Saw 3D a chance. 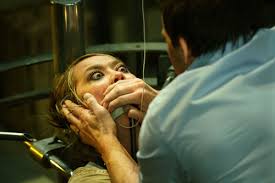 I think the biggest problem I’ve had with the franchise is how unreal the films seem to me. For instance, in the first film all the good doctor has to do is shoot someone he’s never met to save his life and the life of his family. That’s too easy, and I don’t see any humans besides monks and nuns not pulling the trigger. Maybe it’s just me, but I’d react differently in certain of the franchises situations.
That being said, I’ve always been a fan of gore, and the Saw films always have a good share of violence, blood and guts. Saw 3D is no exception; the violence is plentiful and often humorous, besides the occasional pinkish tinted blood which sent me into a fit of hysteria. The film will keep most mainstream gore-fiends satisfied, but fans of underground horror will be disappointed. 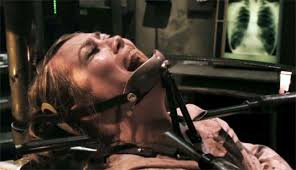 The 3D in the film is a gimmick and was clearly used only to raise ticket prices, which always pisses me off. The effects are super cheesy, and after a TERRIBLE opening scene, add a more comedic element to the film. Honestly, I felt like I was watching a B-movie, when I knew the budget behind this behemoth was astronomical as always.
The filmmakers behind Saw 3D were in it for one thing, and one thing only; money. They clearly don’t care about intelligent audiences or keeping the franchises fans pleased. They threw in scene after scene of random 3D deaths, terrible acting, and a horrible plot. This film contains one of the worst screenplays I’ve seen produced by a mainstream studio in a long time. The actors all seemed like the only prior experience they had were bad pornos and films even my good friend’s over at Troma wouldn’t put out.

This film reminds me of an ideal I was starting to loose sight of. Independent filmmaking is a must to keep cinema out of the trashcans and into the minds of intelligent moviegoers. As more and more of these terrible big films are being put out everyday, it is time for us as moviegoers to demand more from the studios.