Night of the Demons (2010) review
reviewed by: Derek Derewal 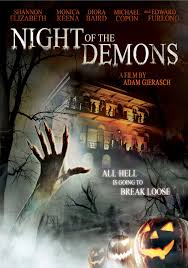 The Night of the Demons remake/re imagining finally has been released to the masses. It got announced in mid-2008. The release date was set for Oct. 2009. An obvious choice for a Halloween themed movie. Then it got bumped to Feb. 2010. Which is the "movie-dump" month. I think it may have even had the "change it to 3D" stamp on it for awhile during its limbo phase. Finally it just ended up on DVD this past Sept..Though none of the DVD stores I shop at carried it. Luckily I ran into super-cool chick Tiffany Shepis at a horror con. So I was able to buy a copy from her. So was the movie worth the long wait??
The premise of the film is similar to the 80's cult classic version. A girl named Angela has a Halloween party in a spooky house. The party itself is one of the best Halloween parties on film. Lots of cool lights, girls in sexy costumes, and great Halloween themed music. Halloween music staples like Type-O's "Black #1" Wednesday 13 "Gimmie Bloodshed" and Concrete Blonde "Bloodletting" are featured. Plus lots more. Keep your eyes peeled for Victor Crowley and the Jigsaw guy on a tricycle at the party. People are having to much fun, so of course the fuzz comes and shuts everything down. Some stragglers hang out afterward for whatever reasons. Then the movie gets its horror gears turning.

Overall the movie is pretty fun. It has some cheesy f/x. But it works for this kind of movie and its not distracting. There's enough blood and guts to please the avg. horror fan. Don't expect a splatterfest like Hatchet though. The demon makeup is kinda cool. Angela looks like the mean sister to Howie Mandels character in Little Monsters though.The F/X are better than most in the DTV films these days. The acting is pretty good. Monica Keena does alright as the lead girl. Her lines aren't as bad as the ones in Freddy vs Jason. I read some complaints that Edward Furlong looked to much like a slobby coke addict. Well, he plays a drug dealer in this movie. So he nails the role pretty good. He plays skeezy and sleezy pretty well. Acting-wise, he is the same in this as he was in Pet Sematary 2 and Brainscan. The guy was never a great actor, but he was usually passable. You cant compare anything else he did to T2. Shannon Elizabeth of American Pie fame plays Angela. Honestly, I wouldn't have even known it was her if I didn't read it before I watched the film. She really doesn't due much in the film. Bobbi Sue Luther (and her scene stealing boobs) and Diora Baird play the fun eye-candy girls well. Tiffany Shepis has a small role but, she plays it really well. She gets to be bitchy and bad ass in her few mins of screen-time. Keep your eyes peeled for a familiar face in a pink dress in the beginning of the films as well. I also read some complaints that the main cast looked to old to be teens at a Halloween party. They never where supposed to be in their teen years. I think all the main characters are supposed to be around 25 years old.

Comparing it to the original. I'd say the original is a little better. I don't love the 80's version like some horror fans out there. It has that 80's charm. The characters are a little more memorable in the original. But the 2009 version would be a great addition to movie night when you are drinking with some friends and I'd say its a definite for a Halloween play list. 45 Grave did a groovy song called "Night of the Demons" for this film that you should check out as well.

Posted by Rob Dimension at 5:50 AM