Jingles the Clown review - Are you scared of a little ole' Clown?

Jingles the Clown
Directed and Written by Tommy Brunswick
Reviewed by : Heather Henshaw 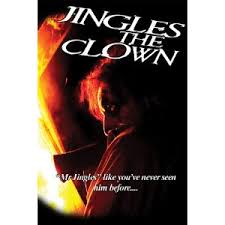 If you love to scare the crap out of your friends with a movie about a psychotic killer clown who just won’t die then this film is for you! If you have a deadly fear of crazy ass psychopathic clowns, well then, you’re out of luck. Lots of people take the risk of making horror movies about clown’s killer clowns to be specific. It is not an easy thing to pull off in the genre. The most people can do is take a swing at it and hope the hit it just right unfortunately most fail but hey it’s worth a watch half of the time.
Mr. Jingles was a child entertainer who turned into a murderous serial killer clown. He would take his victims to his house to torture them and then murder them. Well, one day, he took Angela and her family back to this house. One by one, Angela is forced to watch her family slaughtered. Luckily for her, the police come just in time to shoot the mad clown down before he can kill the poor little girl. Using magic movie stuff, it is now years later and the Jingles places is said to be haunted by the spirit of Mr. Jingles. He still murders any unsuspecting poor soul that heads that way. With the legend getting bigger, a show based on paranormal activity goes to the house. Being greedy, they want to boost ratings. What’s the surefire way to boost those ratings? They get Angela to join them. That may boost ratings but is your life worth it? The crew will soon find out if it was once they start to get picked off one by one.  He tortures their sanity and tests their trust to each other. They have to find a way to kill him before he kills them. But how do you kill a spirit? Specifically, a spirit that looks like a clown?

For me, killer clown movies are hard to pull off. I have only ever liked two and it seems the list will remain: 100 Tears and Killer Clowns from Outer Space. The Brunswicks took on a difficult horror movie topic; I mean, those are big shoes to fill (no pun intended). They did well for what it was. I also give them props on having a supernatural twist to the film; not many killer slasher clown films have that. It had a good few kills to it as well. There were a lot of head kills, clocking in at least three or four. Don’t get me wrong, I love head kills; I am always up for decaps and pez dispensers. I felt some of the deaths were repeated, though. At least two of them I sat back on and thought, “Didn’t I see this earlier in the movie.”
We all know that B-movies do not have the best acting so we tend to cut a little slack on that area. This was fairly bad. Not so much on Mr. Jingles (John Anton) but more so on the rest of the cast. Mr. Jingles was just down right crazy! John pulled off the feel of a guy who truly went psycho. Just the crazy laughs and demented looks he does throughout the movie. It says a lot about roles he can pull off. The other actors in this movie were not impressive, between the over acting by April Canning who plays Angela and the people who are the team of paranormal investigators. Oh wait! I am sensing something as well! It’s… hold on, it’s coming… oops, sorry that’s just the after effects of bad acting. That was my impression of the acting in this movie. None of it was remotely even close to attempted acting. I really really try to give breaks to the indie scene but some are just hard to do.
This film was also dark. I don’t mean dark as in sinister but as in many scenes were lost due to lack of good lighting. For example, there is one scene were an “actor” gets burned to death and Mr. Jingles shows up. Well, figuratively. The scene is so dark, you can’t really see him… it’s just a black blob in front of the man burning. I think so much more could have been done with the film, or maybe it was and we just couldn’t see it. Most of this movie you wish you were there at least your eyes would be adjusted to the dark so you could enjoy it. I was just really disappointed in that aspect of the movie.
In the end, this film was a good effort and I would really like to see them give another go at it and it is definitely leagues better than some of their earlier work (like Biker Zombies from Detroit). Not awful, but nothing to write home about either. Like I said, if you want to scare your friends who are absolutely terrified of clowns then pop this baby in!

About Heather Henshaw -  I absolutely love, live and breathe horror.  I talk what I love and back what I say. I also write for a site called Cinema Head Cheese http://cinemaheadcheese.blogspot.com/ if you want to check it out as well. I just want to say many thanks to everyone for backing horror and the people who bring us the films. If it was not for you guys we would not write or enjoy the genre. We have become a family that I am proud to be a part of. Keep on being spooky y'all…Contact me at teufelskind@ymail.com
Posted by Rob Dimension at 11:42 AM