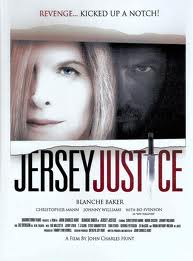 Not very often do I put in a movie that ventures from horror, in this case I did venture away from the genre. So what happens when a woman losses everything? What would you do if you lost your son and your husband all in a short time? The justice system has failed most of the community well at least the outcast group of the social system. This movie to me is a throwback revenge flick that takes us on not only one woman’s struggle but others as well. It shows people do have a breaking point at times in their life and can honestly stand up and say enough is enough.
This movie starts off with a happy Christian family who has strong beliefs the son just got a new job with a bigwig company as a business contractor. Derick O'Bannon (Justin Paul Kahn) the son after getting the job as a contractor goes to Iraq for the company. Tom is kidnaped and held for ransom. The mother Polly O'Bannon (Blanche Baker) tries to plea with W.W. Tolliver (Bo Svenson) to pay the ransom to get her son back. W.W. being the scum boss of the corporation makes up a few tall tales about the son quitting. So of course the company has no obligation to the son being held hostage since he “quit” his job. A grief stricken mother and father now left to try to put their life back together; they are contacted about retrieving their son’s belongings and asked to come get them. When they arrive, they are greeted by a couple of WW henchmen who, before turning over the possessions, want to set the record straight about their son’s death. Realizing these were the same men who followed them earlier, the O’Bannons leave the meeting with the intent of going to the press about what’s just happened. 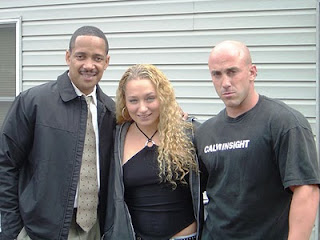 While the O’Bannons were in the meeting not too far from them was an assassination gone wrong. While Carlo (T.J. Glenn) and Robbo (Eoin O'Shea) where fleeing their failed assassination Jack O’Bannon the father got in the way of these two thugs only to pay the price with his life. Polly just witnessing her husband’s death right after losing her son and she is mentally broken. Who wouldn’t be after that? Polly has lost all sense of reasonable thinking due to the traumatic events over the short period of time. A witness saw Polly and told the investigators Detective Vic Bell (Jerry Lyden) and Agent Paul Lane (Christopher Mann) who now franticly scramble to locate Polly in fear for her life that the mobsters will soon hunt her. The authorities have had the media post her pic all over the news and finally pick up her trail, they start to track her but Polly as well is on the right track of her own hunt in process. Polly now knowing the killers and more info than the thugs can assume she knows, her hunt begins for the actual face to face meeting. Polly is not the only one who wants revenge. Her story has touched the hearts of other locals who befriend Polly and have her back on bringing these thugs down that have been running the town. There is also a whole sub plot with the mafia but I do not want to go into that story you shall get no spoilers from me!
As I have said I am not one who ventures to far from horror; I am a blood, guts, and gore kind of girl. This film was a 70’s toss back to revenge movies with many sub plots and story lines, it was a good attempt but a lot of the time it lost me or just dropped off. It was however a good film and could have done so much more if it would have been a little more organized on the story plots. It also could have used maybe just a little more blood there was such a minimal amount if really any at all. There were a few parts that have stuck with me mainly this one scene where she torments Carlo’s girlfriend with a knife and threatens to make her ugly if she does not give up information. I just really wish the story would have been more on point with the sub plots and that is my BIG gripe about this movie.
When it comes to the acting in Jersey Justice I am split down the middle. You have your acting that is eh well your typical indie scene acting and then you have others like Jerry Lyden who I have always seemed to like when I come across his work. My favorite in this movie hands down was Ed McCool who played Finny the local drunk. He was fun to follow and somehow always managed to get out of trouble. Ed plays the role so well and I just wanted to adopt him and take him to every bar I go to he is that amazing to me in this movie. I think Blanche Baker could have carried her role a little better. I was hoping to see more fear shed into the hearts of the enemy but it was a bland performance on that aspect. If you wild a knife in someone’s face you would not be so calm or monotone about getting info out of your victim that is how the performance came off to me. Other than small bits like that the acting was really good.
In the end this movie is defiantly worth the watch. Time to time it is nice to stray from horror granted you may be left with a question here or there in this movie. I just wish we knew what the big secret WW was hiding this whole time. Other than that give this film a watch it’s a fun little movie that has its great moments. I quote it time to time if that says anything. Only fairly good films deserve to be quoted. I give them kudos for the effort and time put in this movie. It was well done other than the multiple plots that made me actually think.

http://www.jerseyjusticethemovie.com/index.html
About Heather Henshaw -  I absolutely love, live and breathe horror.  I talk what I love and back what I say. I also write for a site called Cinema Head Cheese http://cinemaheadcheese.blogspot.com/ if you want to check it out as well. I just want to say many thanks to everyone for backing horror and the people who bring us the films. If it was not for you guys we would not write or enjoy the genre. We have become a family that I am proud to be a part of. Keep on being spooky y'all…Contact me at teufelskind@ymail.com
Posted by Rob Dimension at 4:30 AM