Fell - Relationships Can Bring you Down 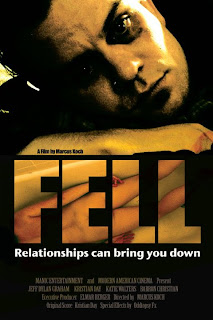 The more I review films, the more attracted I am to Artistic films. Films that play mind games and make you think. Take away the generalized ideas of Horror, the misuse of nudity, the over use of gore...I want Substance!!!....after sitting and letting this film sink into my mind....I really enjoyed this one.
Fell is the story of Bill (Jeff Dylan Graham) and his problems. Shot with a darker tint, a somber feeling is felt through out the entire film. Bill wakes up with a body in his bath tub, who is she...where did she come from? As this story unfolds, we see Bill is a bit unbalanced....not in a demented, serial killer way...just a product of manic depression and prescription drugs.
I will not spoil this story for you, I will only give my opinions and observations. Fell is not a film for everyone, those really looking for Horror will not find that here. It's a simple concept that twists and turns as Bill falls deeper into his delusions. The acting is very good, Graham does a great job of portraying Bill, it's believable.  The script is good but I feel that the movie is a bit too long, there was a little section in the middle that could have been trimmed. I will say the stand out, for me is the mind games...the games this film plays on YOU, the viewer. Not M. Night crap...this is good, wholesome story telling...it left me wondering if I saw what I saw or if I should head to the shrink, myself.
When this film is available, I highly recommend looking for this one. It is fantastic to watch, you enjoy riding someone's delusions. It was nice to take a break from my problems and enjoy Bill's.

Posted by Rob Dimension at 5:34 PM