ToeTag Inc's Sella Turcica review and then some... 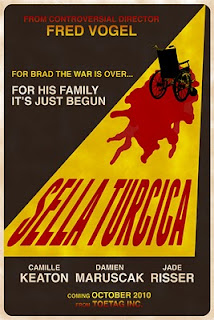 Sella Turcica review
by Rob Dimension
Over the past 8 years I have watched ToeTag grow leaps and bounds. From the once small renegade, underground film crew to a full fledged, movie and special effects leader in the Horror genre.  From the early incarnations of shock, point of view, in your face films like August Underground to highly polished, well developed features like Redsin Tower. They, to me have always delivered the goods in the Horror and Gore departments. 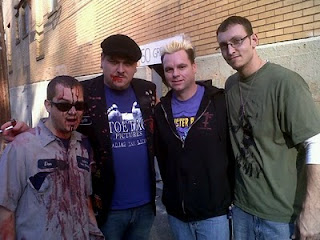 This past Sunday I was given, what I felt was a chance of a lifetime, a private screening of there newest, yet released feature Sella Turcica at ToeTag studios with Writers and Director Fred Vogel, Don Moore, Shelby Vogel (not pictured) and Lead Star, Damien Marusca. How could I resist? Simple answer...I couldn't. I will share my thoughts on the overall experience at the end of this, but here is enough about Sella Turcica to wet your appetite.
Plot Synopsis - Sgt. Bradley Roback (Damien A. Maruscak) returns home from active duty after a mysterious accident leaves him paralyzed. Awaiting his return, his mother, Karmen (Camille Keaton), and younger sister, Ashley (Jade Risser), remain unaware of the details of the accident and severity of Brad‘s condition. Once he arrives, though he looks sickly, his family members are pleased to see him alive and don’t bring attention to his ill appearance. Over the next twenty-six hours Brad’s condition terribly worsens, barreling down to a gruesome conclusion that will change the family forever.
Okay, first let's get a definition of what exactly Sella Turcica is (credit Wiki) - The sella turcica (literally Turkish saddle) is a saddle-shaped depression in the sphenoid bone at the base of the human skull. Are you more confused? I bet your thinking, what the hell does this have to do with anything?? I think that's what ToeTag does best....they make you think.

This film is different than anything ToeTag has put out to date, this shows how Fred and company have really grown. This film is a Drama with horror mixed in perfectly, where needed. The gore is kept to a minimum and this film is carried by the acting. The cast does a tremendous job in developing a relationship with the viewer, a rarity in today's cinema. Camille Keaton, (I Spit on Your Grave) pulls off a great role as a concerned Mother who simply is happy her son is home from war but, won't admit there is a problem. Damien A. Maruscak, for me, steals the show.....his portrayal of a soldier who just wants to keep his family protected, plus going to great lengths to hide what is truly happening is fantastic (his physical performance is something you will all be talking about...guaranteed).
If it sounds like I am being vague, I have been sworn to secrecy (can't really reveal much plot detail) and will fully review the film once it hits DVD. This film, to me, carries a few heavy political messages - I really can see possible frustration on the writers about the way our soldiers are treated once they are home. Our soldiers that fight for our freedom, when injured, are often just cast aside in our busy lives. Many times the families are left to clean up the mess.
I also can see what the writers perceive as a modern family, and how it's often dysfunctional. You have two brothers who are mismatched but have a great connection, they also, both protect their younger sister. A Mother who just wants her children happy and will always try her best to keep the peace. The arrogant boyfriend of the younger sister, who is (at least to me) a massive douche bag.....played perfectly on film. I fell for all of these characters, hook - line and sinker.

ToeTag Studios was a great place to visit: Jerami Cruise's laboratory of monstrous creations was a sight to see...props from past films and replica's that he has made. Just awesome. Fred and Shelby have plenty of collectibles of their own...Frankenstein's of every size and shape, chainsaw's signed by the entire cast of the Texas Chainsaw Massacre (actually 2 of them) plus countless prints of different feature films.
Did I mention I raided the ToeTag store? I had too...how often do you get this chance?
In closing...HUGE Thank you to the entire ToeTag Ink crew for the hospitality. Knowing Fred and Shelby for over 8 years now, for me as a friend and fan, this was a fantastic day.
For more info - Visit www.ToeTag.Biz

Posted by Rob Dimension at 3:50 AM