This is gonna SUCK - SUCK gets reviews by the PIG!

This is gonna SUCK! Not Really! 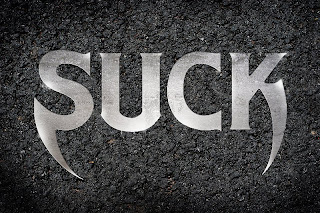 
Ello piglets. I'm sure you all know by now, your zombie pig pal is none to fond of the vampire genre and actually goes out of his way to avoid vampire films. (Blacula aside) Our story opens on a struggling band "The Winners" who just can't quite get the big break they are lookin for. After a gig in a dive bar and the the cute female bassist, Jennifer (Jessica Pare) leaves with fella who looks like a cross between a demonic Carrot Top and Johnny Depp's Mad Hatter, finds that her one night stand turns into more than she bargained for. I must say that the party scene was rather cool, as short as it was. Jennifer shows up for sound check the next day paled out creepy eyes and all. We can all figure out what happened, no? At the gig that night, Jennifer rocks out on the bass and the crowd absolutely is enthralled by her new look. It appears her new vampiness gives her that lil something the band has been lacking all these years. It seems their time has arrived. You know, come to think of it... I think this is how No DOUBT got their start. 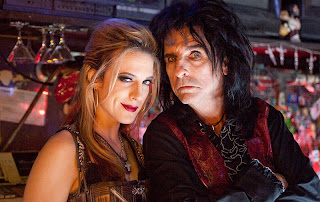 Enter Eddie Van Helsing (Malcolm McDowell)seeking revenge on the head vamp, "Queenie". As you can guess, chaos and blood sucking wackiness ensues.
This is a solid film and LOTS of fun. Seriously, i enjoyed it from beginning to end and Writer, Director, and Star Rob Stefanuk has something to be proud of. This is a definite thumbs up. Solid acting and great supporting roles by McDowell and Alice Cooper as well as hysterical cameos by Henry Rollins, Iggy Pop, Moby and Dave "Kids in the Hall" Foley. Suck not only delivers in the comedy arena but there is plenty of blood. While its not a gorefest by any means, it has enough of the sauce and some cool special FX to keep fans happy. The transitions were reminiscent of a GUITAR HERO goes to Hell, which I completely liked. It had updated elements of the classic Dracula story right down to its French/Canadian version of Renfield.
Well done Mr. Stefanuk. 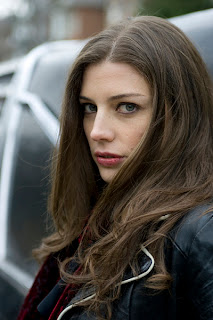 I can honestly say i don't have a bad thing to say about this movie, DESPITE it being a Vampire movie. Its soundtrack was well done (it may not be my particular flavor of music but it did well) and it was shot extremely well. I can make a thousand analogies and comparisons to a thousand other vampire movies... but they don't deserve the comparisons. Suck delivers. It does what movies should, it entertains!
Just remember, "Never trust a god damn vampire!"

Posted by Rob Dimension at 7:31 AM