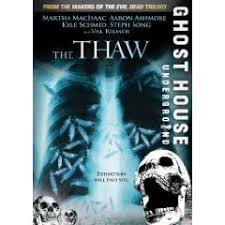 The Thaw (2009) reviewed
by : Rob Dimension
Who doesn't like a little Sci-fi with their Horror? Ah hell, I do...remember the John Carpenter's The Thing? Sure you do...after all your a Horror fan. The 2009 flick, The Thaw kinda has some of the basic elements and actually does a pretty good job with this one. Please don't interpret the first paragraph as me comparing those two..while the premise is basically the same...they are NOT.


Being stranded in the Frozen Tundra has it's benefits, I'm a City boy so I couldn't tell you any of them...so, moving on....this story is about your typical Scientist, studying in the Canadian Artic (played by Val Kilmer) who stumbles upon a Woolly Mammoth uncovered by a Polar Bear. A closer inspection of the pristine discovery, finds a much, much larger discovery.....a parasite that lays eggs and infects everything.

An Environmental message is really the story here "What will destroy the human race?", "how do we lessen the population?"...."what do we really make of Global Warming?" All great questions, I often wonder about...what will really lead to the end? Val Kilmer really isn't in this one much, but he is effective and plays a very great role, it's no Batman, but still solid.


The Story, special effects and acting in this one were all decent. Some great disheartening moments of hope, and some spots that make your skin crawl. Decaying flesh, insect eggs hatching and a memorable "bloody piss" scene all make this one enjoyable. I liked this one (ahh..so nice to LIKE a movie these days) and would recommend checking it out. Is it a buyer? Probably not...it's a good rental though.