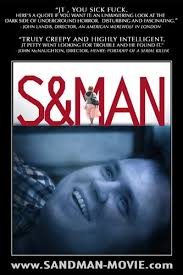 After hearing a lot about JT Petty’s newest film, S&Man, I decided to get my hands on a copy and see it for myself. The film starts out in a narrative documentary style, exploring the culture of underground horror films. Petty travels to a horror convention where he meets up with a new young filmmaker who goes by Eric, and is the filmmaker behind the S&Man series of films.
Things start to get weird, as Eric grows more and more partial to Petty and his crew, but the more Petty pushes to get into Eric’s mind, the more defensive Eric gets. It becomes clear that something is wrong with Eric, and the film takes a turn away from fact and into fiction, while still providing a lot of insight into voyeurism and extreme filmmaking.
Petty interviews a few different doctors who specialize in voyeurism and sexual deviants. He also gets a lot of insight from cult filmmaker Fred Vogel and Toe Tag Pictures. Vogel is responsible for some of the most graphic films to date that are the closest you can legally get to snuff. He provides JT with a firsthand account of a snuff film he watched and the effect it had on his life. These real accounts are interlaced with insight from scream queens and filmmaker Bill Zebub along with fictionalized stories from Eric about his S&Man films. 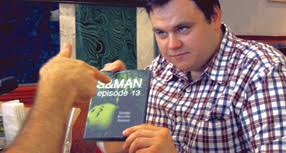 My favorite part about this film is the way it makes you think. Petty does a great job at making you feel weird about watching extreme horror films. He drives deeply into your psyche and then rips it apart when things turn out for the worst. Are we all just voyeurs? Do we all have that little voice in the back of our heads urging us to look into the fire just to catch a glimpse of a burning corpse? Petty does a great job of convincing us that as humans each of us has a yearning to view violence, but he also reminds us that when you see so much violence and chaos on screen you become numb and eventually, for some people, the only way to feel the rush of horror films, is to act out in violence. Do we all secretly lust for blood?

Posted by Rob Dimension at 4:52 AM