Return of the Living Dead 3 - Romeo and Juliet Zombie Version 1.0 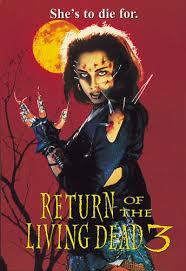 Return of the Living Dead Part 3
reviewed by : Rob Dimension
Released in 1993, this entry into the Return of the Living Dead series changed the tone, adding more romance and less comedy. Melinda Clarke plays Julie, our leading...well, zombie with a heart.
Synopsis - Colonel Reynolds and his group of government scientists continue their work on re-animating the dead for military use. His son Curt and his girlfriend Julie use Dad's security pass to sneak in and watch the proceedings. Later when father and son have a disagreement, Curt and Julie take off on a motorcycle and Julie is killed in an accident. Grief-stricken, Curt takes her body to the lab and brings her back to life. Curt must help Julie deal with her new existence as military agents and local gang members try to find them. 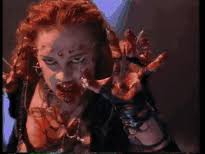 Ah, where do I start with this one?? I am a big fan of this version of a Zombie Romero and Juliet so to speak, doesn't get a lot of props. Melinda Clark is attractive and make a seriously sexy zombie, especially towards the end. Fending off her hunger she "self mutilates"herself..you know, similar to the EMO kids at the malls on Friday nights. Constantly on the run and looking for a breather, this film still holds up well and packs some fun Zombie punch.
"Does this belong with the Return of the Living Dead series?" Yes and No. Yes, because if it didn't have the name credibility that we ALL loved with parts 1 & 2, I don't think it would have garnered the success that it did. No, because on the same token, I thought that Thom Mathews and James Karen literally stole the show in Dan O'Bannon original. I still constantly watch that one....so good easily a top 5 Zombie film for anyone. This 3rd film really needed it's own identity but probably would have been lost in the shuffle. I still highly recommend this one, especially when spending time with that special someone, always tell them you would use Trioxin to stay together forever!!! 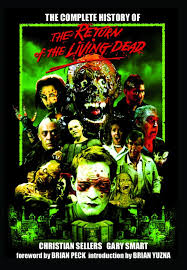 Directed by Brian Yuzna, who also directed Bride of Re-Animator and Beyond Re-Animator (also have a huge Cult Following) and wrote Honey I shrunk the Kids does a decent job at getting us exactly what we want...Brains!!! The Gore is fun, nothing too intense or over the top. I actually enjoy the "Half-eaten head" Zombie that attacks the Police. The standard special effects will always be my top choice over CGI, sure it would look better but isn't that part of the charm? Plus, how about that zombie from the Government lab? Almost naked and scary!!
If you are a fan of The Return of the Living Dead series, make sure you grab the "Complete History" book (shown to the left) - this is informative and a MUST have if your a Zombie Fan!!!

Posted by Rob Dimension at 6:19 AM