The Path of Torment reviewed - Don't Answer the Door!

The Path of Torment
reviewed by : Michael K. Snyder 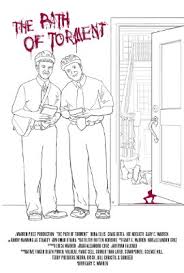 Gary C. Warren’s film The Path of Torment has been making a fairly decent splash in the indie horror world. I tried to read as little as possible about the film before watching it so that my review could be as unbiased as possible, but there are a lot of rave reviews out there for this film.
I’m going to start out by explaining the number once aspect to independent film making. The one thing that can turn a powerful plot and script into an amateur looking film, and the single biggest pet peeve I have when watching a film…audio. If a film’s audio isn’t synced right, if it is all clearly ADR and/or terribly mixed, or if the music in the film overpowers any dialogue, I go nuts trying to sit through the film just to see how it ends.

Unfortunately, The Path of Torment’s audio tends to drift into the realm of terrible multiple times during the film. For example, the opening scene of the film has music that is much too loud, and the obvious ADR of the dialogue is painful to watch. I did, however, enjoy the dialogue in the opening scene a lot, but I personally would have opened the scene differently, perhaps skipping straight to the two crazed religious freaks riding up on their bikes. Much more of the film has some pretty bad audio synching as well as some crappy mixing, but given the budget of the film, the audio can be swept underneath the rug.
Most of the shots in the film are decently composed, and it is clear that Mr. Warren has an eye for filmmaking. I think if he was given a decent budget and better equipment, this film could easily be a great horror/comedy. Some of the acting in the film seems very unfocused; actually most of the performances besides the two leads are bland and unrealistic. For instance, in one scene one of the character’s wives is knocked over the head with a bicycle helmet. The husband reacts with nothing more than simple confusion, and his facial expressions represent more of a sense of stupidity rather than fear or rage. Yes, he has a box cutter in his face, but still it’s his wife and I feel a more realistic reaction would have deeply benefited the scene.

This film is extremely tongue in cheek, and cannot be taken seriously, which is my main complaint. The story is decent, and should have been treated with a bit a more respect. I feel like something along the lines of Kevin Smith humor would have benefited the film much more. Maybe it’s just my personal tastes, but being a huge Troma fan, I doubt that that’s the issue. I just feel that this plot is too genuine and too solid to throw it away with some goofy humor.
I’m eager to see what Warren does next, as I’d like to see a solid rewrite of this film and a much better soundtrack. The director clearly has a good vision, and he obviously knows how to compose a frame, but the screenplay needs some serious work.

Michael K. Snyder is a student filmmaker in Winter Park, Florida. When he's not in class he is working on screenplays, short films, working with Rob and the Late Night Crew and anything film related to keep him busy. He is always looking for work and is currently seeking an agent or any form of representation. If you are interested in working with Michael please email him at mksnyder1990@gmail.com
Posted by Rob Dimension at 4:51 AM