My Soul to Take 3D
reviewed by : Michael K. Snyder
After reading countless reviews on how terrible Wes Craven’s newest vision was, I decided I needed to see it for myself. Now, let me start this off by stating that I hate 3D, and the only other 3D film I’ve seen in theaters was Piranha 3D, which I loved.  But, since I’m such a devout fan of Mr.Craven, I decided to give his 3D vision a shot.
The film is old-school Craven, and his genius shines through in every frame. Everyone whose review states how terrible the acting was in this film should be tied up and barbecued in their backyards. This is a cast of mainly young actors and actresses who are portraying high school students, and their dialogue represents their state of mind. Of course they aren’t going to be quoting some great English scholars, the main character is only 16! They speak to each other like teenagers, they act like teenagers, and Wes Craven obviously has a lot of experience working with young actors.
Each frame in this film was textbook film-making; foreground, middle ground and background. Wes clearly shows his worth in these shots because each looks like it was crafted for hours. I felt like I was watching something from one of my film classes about framing the perfect shot.
The story of My Soul to Take isn’t very straightforward and that may turn some viewers off. Craven doesn’t just hand you the plot and treat you like an idiot, but instead he releases key points ever so often to keep the viewer guessing. Maybe his film is just too smart for the average moviegoer? I wouldn’t doubt it. Wes uses his psychology background and great storytelling skills to craft a masterpiece that is just too intricate and thought provoking for the usual horror film viewer. 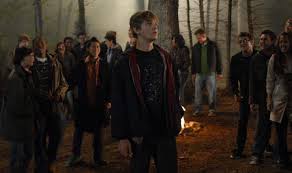 The violence in My Soul to Take isn’t quite as intense as something like Hatchet, or many old school 80s slashers fueled by Savini’s genius. It is, however, effective for the type of film Wes was trying to make. He was trying to make an intelligent horror film, nothing over the top. Actually, many of the scenes and situations portrayed in the film made me feel like this would have been A Nightmare on Elm Street had Wes remade it. There is even a scene, which features red lights, a boiler room like environment and multiple Freddy moments. As a huge fan of Freddy, these little scenes made me smile.
Overall, I think moviegoers should give Craven’s latest venture a shot, but ONLY if they are old enough to use their minds while watching a horror film.  I feel like if Wes hadn’t made this film and it was made in a foreign market, people would be praising it for its smart storytelling and great cinematography. Maybe I just look too deep into things, but to me this film was smart, scary and fun.
Michael K. Snyder is a student filmmaker in Winter Park, Florida. When he's not in class he is working on screenplays, short films, working with Rob and the Late Night Crew and anything film related to keep him busy. He is always looking for work and is currently seeking an agent or any form of representation. If you are interested in working with Michael please email him at mksnyder1990@gmail.com
Posted by Rob Dimension at 10:37 AM