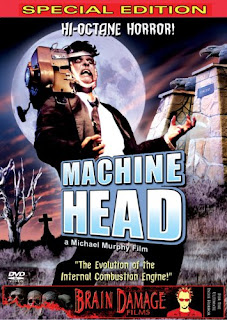 Hello Piglets. This installment I bring to you a classic in the making. An ubridled tale of science vs. religion, man vs. the elements, a tale of a modern day Prometheus. Man's conquest to no longer be restrained by the chains of life and death set for us by a higher power... Ok, no i'm getting a lil crazy here. This is a movie about a nerd who with his PC and a 4 stroke engine, brings a fella back to life. Think Weird Science meets Reanimator meets Revenge of the Nerds, without all that pesky budget to get in the way. While this movie is far from stellar, it is a solid film that just suffers a bit from the lack of budget. Don't get me wrong, i'm not saying you can't have a great film with no budget. I'm just saying that in my opinion, this movie could have been SO much more. Maybe I expect too much? I'm hardly knocking it, it was an ambitious outting. They just didn't hit the mark.


Lets go over our ingredients list for this stew. One leading man, Max Kelp (Josh Walitt)is your stereotypical genius/nerd kid who everyone picks on and never gives any respect to. Stir in the jocks who constantly bully Max and throw in the overbearing, God-fearing, unsupportive father (who happens to run a funeral home... how convienient), sprinkle friends and family of the cast and crew in as extras, a $25,000 college scholarship, thats right the folks in this High School class would give Andrea Zuckerman a run for her money (kudos to those who get that reference) annnnd lets not forget the innocent, unknowing (and likely uninterested) love interest, mix vigorously and let simmer for 79 minutes and you have the makings of a movie called MACHINE HEAD.

This has all the earmarks of the classic Frankenstien tale. Fella invents a process to reanimate the dead. Reverse Impulse Bypass Manipulation in which he uses his a 4 stroke motor attached to the corpses head (Thus Machine Head) and uses his computer to pump digital signals to replace the lost synapse. Its really a very plausible premise. I s'pose as plausible as any reanimation story. Needless to say Max loses control of his creation and things go from bad to worse when Machine Head runs amock on the town. Like all creations gone wild stories, as the movie progresses we realize that Machine Head really isn't that much of a monster.
Just misunderstood. Aren't all monsters??

Kudos to Rich Cowden for playing a believable and a rather likeable Machine Head. As always I won't give away any spoilers in this review, but the end has a twist worth of M. Night Shamalamawhatever. The gore was low in this movie, they could have really made a niche for itself if they let the blood flow a bit more. One thing this movie had goin for it was that it never took itself too seriously, which is one of the downfalls of most low budget movies these days. Its the use of the comedy that keeps this movie from being an utter failure.
So what i'm saying is if you get hold of this dvd, give it a watch. Its a fun movie, but just don't expect much.