Martyrs movie review - Not for the Feint of Heart! 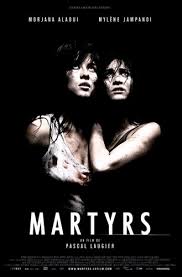 Pascal Laugier’s ­­­film about abuse, torment, victims and of course, martyrdom is one of my favorite DVDs in m 400+ collection. I love everything about this film from start to finish.  Laugier’s vision is tragic, gore-filled, and deeper than any mainstream horror film in recent memory.
When I first watched Martyrs, it was when it was first released, and I found it hidden in a local Blockbuster. I had heard of how intense, violent, and gory the film was and I was just really getting into French horror films. So, out of curiosity, I grabbed the DVD, paid the rental fee and went back to my apartment to venture deep into Hell on celluloid.
At first, the film feels like another Hostel, Saw, or any torture porn films that have seen a spike in acceptance in the past few years. I saw acceptance because back when films like I Spit on Your Grave came out, they were simply considered video nasties. Now, these films are accepting horror film awards worldwide, but that’s a whole other discussion all together. 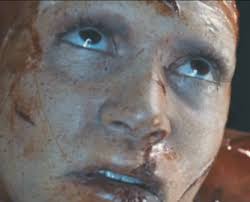 Pascal does a great job using intrusive filmmaking to keep an uneasy feeling constant throughout the film. Combining these tight, relentless frames with great art direction and a dark color scheme creates an atmosphere that truly gets under your skin. The best part about this entire film is Pascal’s boldness and no-holds barred attitude. He doesn’t care if you don’t like it, and that makes him powerful outside of the “studio” system.
The acting in Martyrs is excellent, as the actors and actresses truly live their roles. The intensity felt in the two lead actresses performances brings an element of drama to the film that most horror films have never even touched upon. I look forward to seeing more work from the leads.
Of course, the film will feed any gore-hound, and shock any pregnant mother. It’s level of violence isn’t something we have quite grasped upon here in America. Sure, we have a lot of very violent films and TV shows, but nothing really touches the reality of Martyrs, and not many American directors have the balls to take their films over the line. The subject matter of the film adds to the intensity of the violence in the film, along with amazing special effects. 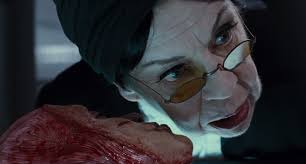 When it comes down to it, Martyrs is a smart, depressing, gloomy, and sadistic film that wields great acting, directing, and a great screenplay. I thought about the film for days after I first watched it, and after it finally sank in, and I finally understood my own personal meaning behind the film, I bought it.  It’s not for the feint of heart nor is it for the youth, but this is a great example of filmmaking and once again proves that horror films CAN be GOOD films.


Michael K. Snyder is a student filmmaker in Winter Park, Florida. When he's not in class he is working on screenplays, short films, working with Rob and the Late Night Crew and anything film related to keep him busy. He is always looking for work and is currently seeking an agent or any form of representation. If you are interested in working with Michael please email him at mksnyder1990@gmail.com
Posted by Rob Dimension at 5:44 PM