Kiss Meets the Phantom of the Park - 32 years ago...would Halloween ever recover?

Kiss Meets the Phantom of the Park
reviewed and remembered by : Rob Dimension

On October 28th, 1978, my world was a little brighter...being an avid 8 yr old Kiss fan, I had to stay up to watch the greatest film of my early lifetime...or so I thought. Kiss Meets the Phantom of the Park premiered on NBC as the Saturday Night at the Movies feature and would be revered as a Cult Classic 32 years later.
I know...a cult classic...come on Dimension, what are you thinking? Let me explain, I saw Kiss in concert in Massachusetts in the Summer of 1978 and they were pimping this movie hard. The "Dynasty" tour was my first concert experience, I have completely blocked the Helen Reddy experience my Mother dragged me too, and what an eye opener KISS was. Enough about my childhood trauma...let's talk about this Classic. Did I mention I am a card carrying KISS Army member? 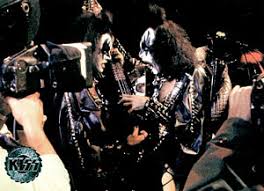 For years, this was only available as a Bootleg, no wonder, as the members of KISS absolutely hated this film. Also titled, KISS in the Attack of the Phantoms, this film was plagued with problems. The script went through several re-writes, the band were NOT actors and it really showed, the portrayal of the group was just horrendous but, looking back, I actually find charm in the film and actually enjoy it.
Some many not know that the film was produced by Hanna-Barbera, yep the same guys who made everyone's childhood filled with Scooby-Doo, the Flintstones, The Banana Splits, the Jetsons and tons more. Gene Simmons was "The Demon", Paul Stanley the "Star Child", Ace Frehley the "Space Man" and drummer, Peter Criss was "the Cat Man". Laughably, all having super-natural powers and pushing the fans imaginations with just much we would believe. I believe that these guys can rock..not need some talisman gimmick....but I was 8 yrs old and bought it hook, line and sinker.

Synopsis (credit Wiki)- The tale of rock band KISS and their efforts to thwart a diabolical plan by mad scientist Abner Devereaux. Devereaux has found a way to clone humans into robots in his laboratory at an amusement park. It just so happens that he plans to uses the KISS concert as a platform to unleash his plan on the world. KISS must use their special powers to stop him.

This film does have some Horror moments...you see Frankenstein and Dracula, plus these werewolf type henchmen...pretty villainous huh? Even Killer Robot versions of KISS themselves. The mad scientist, played by Anthony Zerbe (who has been in countless film and television projects) does a fantastic job...no kidding.

For me this was more of a trip down memory lane than a review - sorry, couldn't resist...I LOVE Kiss still today and still have my bootleg copy of this on VHS and plan on spending my night re-watching and enjoying the modern movie classic. If you can find a copy, do your self a favor...watch it, if anything just for the ridiculousness of it all.