It's a Ranting Pig - Shootin' from the Hip!! Pigamortis says "Like what you do!"

So normally i know this spot is usually reserved for my elementary ramblings that are guised as movie reviews. This time however, i am sitting in the Pigamortis compound, I happen to have "A Nightmare on Elm Street: The Inside Story pt.1" 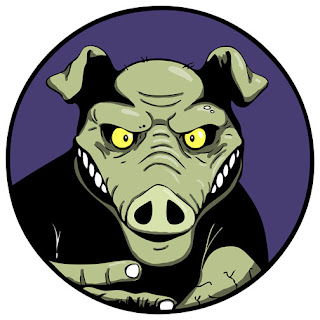 Now I've always been a fan of the "behind the scenes" stuff for movies i loved.
Let me start off by saying, I dig Freddy Krueger. Robert Englund played a character and made it his own and changed the landscape for movie baddies ever since. That being said, the Nightmare franchise less than thrills me. Sure, I own all seven movies and have seen them more each more than a few times each. Are they my favorites? Not even close. If i had something else to watch, would i? Absolutely. They kind of bite (barring Dream Warriors). After watching this behind the scenes thing, its clear why. Starting from Nightmare2: Freddy's Revenge, Wes Craven was bumped/quit writing responsibilities because A) he never wanted Freddy to be a franchise (oh you high fallutin artists) B) He didn't think Freddy should be brought to the outside world and it was steering away from the original idea.
I admire Wes Craven for this sort of artistic integrity, but New Line could care less. Instead they went with hack writer, David Chaskin. I know you're saying "BUT PIG, DAVID CHASKIN!"
C'moooon piglets you know, he's the genius who wrote 1987's "The CURSE" and 1992's "Midnight's Child"... yeah I never heard of him either. Can't imagine why. Then New Line tapped one of thier guys, Jack Sholder who was fresh off "Alone in the Dark" (another classic, blech) So, they have this clown on this biography,and I hear him say "I wasnt a fan of the first Nightmare film... so i had no compulsion to stick to the original..."
PUMP THE FRELLIN BRAKES NELLY! Does anyone else find something inherantly WRONG with this???
"I wasnt a fan of the first one..." THEN DON'T DO A BLOODY SEQUEL FOR IT! Find someone who ACTUALLY CARES ABOUT THE FRELLIN MOVIE! I'm sure there is a BUSLOAD of people who would give thier firstborn to direct a Nightmare on Elm Street movie that would do a shit-ton better than you! WTF?! I don't understand why people who don't have passion for what they are doing are given these seats of power over things which other people love. I mean I know I'm picking on Elm Street but this applies to Movies, comics, books, tv shows.
Perfect example, I know alot of people have issues with Rob Zombie's Halloween. (Save your whining, i like Zombies' stuff) A BIG reason I'm a fan of his stuff is because he is a legit fan and you can TELL! (ok, maybe not so much with Halloween2, what was with the horse?) ANYWAY, the point is if you don't have real passion for what you do, then step back and DON'T DO IT! You're the new writer for the HULK comic but never read a Hulk comic before? PASS!
You're doing the sequel to the new Hellraiser and never heard of Clive Barker? PASS
Oh you're doing an update on the tv show X-Files and you never saw an episode or are even a fan of Sci-fi?
PASS
We don't need your take on it. As a matter of fact, your opinion means less than nothing. You're in it for a paycheck and i understand that people need to make livings, etc. So save any bullshit arguments about "Sell out way the Hell out!"
You can "sell out" and still have passion for what you do! Thats all i'm saying. Sorry, rant over. You're dismissed.
Posted by Rob Dimension at 1:39 PM