Gamera vs. Barugon reviewed - SHOUT! Factory gives us a reason to SHOUT! 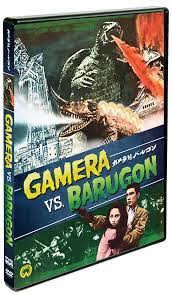 GAMERA vs. BARUGON
Director: Shigeo Tanaka
Writer: Nisan Takahashi
Cast: Kojiro Hongo, Kyoko Enami, Koji Fujiyama
Released by: SHOUT! Factory
Review by: Mark Mackner
Hello, my fellow monster movie maniacs! Tis I, Mark Mackner, with a review of an old classic given a long-overdue remastered, uncut release! GAMERA fans, rejoice! We’ve been waiting for this moment, and it’s finally arrived!
A couple years back, we kaiju fans were blessed with the release of Classic Media’s TOHO MASTER COLLECTION, in which several classic GODZILLA titles were remastered, and we were given both the US and Japanese versions on one disc. PLUS, they gave us both versions of RODAN and WAR OF THE GARGANTUAS! Oh, what a time for kaiju fans! I’d never seen any of those Japanese versions, and they are magnificent, indeed. Then, whenever you feel like watching them as you remember from your childhood, you can watch ‘em with the English dubbing, too. 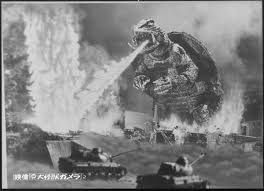 Well, it’s taken a little time, but now (Thanks to the good folks at SHOUT! Factory), our favorite giant prehistoric radioactive flying turtle Gamera is getting the same treatment. Hooray! Until now, all VHS and DVD releases of the Gamera Showa series have been abysmal. Blurry, unfocused picture, lackluster sound. I grew up watching these movies, and I can tell you with 100% confidence that these films have NEVER looked or sounded better than these SHOUT! releases.
Which brings us to the subject of today’s review, the second film in the Gamera Showa series, GAMERA vs. BARUGON aka WAR OF THE MONSTERS. To many, this is considered the last “serious” Gamera film of the Showa era. But that’s just silly. The first film was pretty wacky, and this one is even more so. But I mean that in the most loving way possible.
The plot, of course, is simple. A man who fought in the South Pacific during WWII hid a giant opal he found on a remote island before the Japanese surrendered. Now, 20 years later, he rounds up some men for an expedition there, to retrieve the opal that will surely make all of them rich.
So these guys then venture into the dreaded VALLEY OF THE RAINBOW to find this thing. That’s right, the place whose very name strikes terror into the hearts of the natives is called THE VALLEY OF THE RAINBOW. Sounds NIGHTMARISH, doesn’t it? Anyway, the opal turns out to be an egg, from which hatches forth the legendary BARUGON, who shows up every thousand years to fuck shit up. At least, I’m pretty sure that’s what the tribal elder said.
Barugon is a fascinating creation to behold. Kaiju fans will note that his name is almost identical to the Toho monster BARAGON (One of my personal favorites), who first appeared in the film FRANKENSTEIN vs. BARAGON, which was released before GAMERA vs. BARUGON. So, is Barugon a total ripoff of Baragon? Well, no. Not really. I mean, they’re both primarily 4-legged dinosaur-like monsters with large nose horns. That much, they share.

But, whereas Baragon is a burrowing, subterranean beast, Barugon makes no effort to keep hidden. He travels above ground wherever he pleases. But it’s his methods of attack that REALLY set him apart from Baragon, and every other kaiju for that matter.
First, Barugon has a long, sticky tongue that emits an ice-cold mist that freezes everything it touches. And then there’s his coup de grace, the rainbow ray that shoots out of his back and destroys everything in its path. Yeah. He’s a dragon that shoots deadly, destructive rainbows. Wildly original!
Oddly enough, Gamera isn’t really in this movie very much. The first ten minutes explain what happened in the first film, and how Gamera returned to Earth. After that he doesn’t return until about halfway through, only to get his shell handed to him by Barugon. From there, he doesn’t come back into the picture until the VERY end to save the day.
But there’s still loadws of monster action to admire here. Barugon gets gobs of screen time, and in this remastered version, his rainbow attack looks terrific. This is a great kaiju film, and this new edition is a must for kaiju fans. The packaging is awesome, with the anatomy of Gamera on the inside layout. And the booklet inside has the anatomy of Barugon, as well as character bios and more.
The only negative to this new release is that there’s no English dub option. I mean, I don’t really care, I have no problem with subtitles, but my kids aren’t really ready for ‘em yet. But otherwise, this is definitely one you could enjoy with your kids. 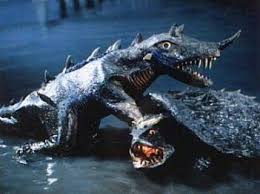 SHOUT! will be releasing the rest of the Gamera Showa series as double features. GYAOS and VIRAS will be on one set, GUIRON and JAIGER on another. They’ll both have two English dubs on all the films, including the infamous Sandy Frank versions. Plus, they’ll feature the Japanese language option, with English subs. Those’ll be out next Tuesday. The final two Gamera Showa films, ZIGRA and SUPER MONSTER, don’t have a release date yet, but they’re coming.

GAMERA vs. BARUGON: A+
Add me on Facebook!
facebook.com/markmackner
When not hanging out at The Horror Hotel, Mark Mackner can be found creating such local indie horror gems as DAISY DERKINS: DOGSITTER OF THE DAMNED!, EVIL BREW, THE HALF-LIFE HORROR FROM HELL or: IRRADIATED SATAN ROCKS THE WORLD!, and EMBALMO!  He’s also the resident Spider-Man scholar over at geek site POPTARDS where he writes SPIDEY’S WEEKLY WEB-UP.  In 2011, he’ll be directing his latest original script PROM NIGHT ABORTION!
Posted by Rob Dimension at 1:12 PM