Last year, we were given a whopping 13 Halloween tales. This time, it’s just 6. But quality rules over quantity, right? So, do slightly longer stories make for an overall better book? The answer is (In this case, anyway), no, not really. 2010’s Special isn’t any better than 2009’s. But it’s just as good! Anthologies such as this are always a mixed bag, with some stories shining, others tanking, and some just not really making any sort of an impression at all. Some of them pass by so quickly that you don’t even have time to formulate an opinion on them, one way or the other. But, if you’re like me, and you eat these things up, then there’s plenty to enjoy here, though. And, if you’re also like me in that you have kids that you love sharing the joy of comics with, I’ll let you know which are kid-appropriate, and which are questionable. To wit, a rundown of what you’ll find in this year’s collection…
BATMAN in “TRICK FOR THE SCARECROW”, by Billy Tucci. Scarecrow breaks into a home on Devil’s Night (aka Mischief Night, for those of us who don’t live in THE CROW’s universe), accidentally sprays himself with his fear agent, and is terrorized by two little kids in Batman costumes with a grudge. You see, Scarecrow stole their candy in the 2009 Special, and now it’s payback time. I liked the bit with the Mom, and seeing Dick’s more lighthearted Batman get a chuckle out of the whole ordeal. Breezy Halloween fun, suitable for all ages. Grade: B.
BATMAN & ROBIN, with I… “VAMPIRE in “ROBIN THE VAMPIRE SLAYER”, by Joe Harris and Lee Garbett. Andrew Bennett (I… Vampire) leads Batman and Robin into a nest of some especially nasty vampires known as “The Cult of the Blood Red Moon”. But can Bennett be trusted? What’s his gripe with these vamps? Or is he setting a trap for the Dynamic Duo? A decent enough supernatural action yarn, spun in just 7 pages! Some action, but not bloody, so you could share with the kids. Which is good, because my kids will definitely be down for some Dynamic Duo vs. vampire action. Grade: B.

THE FLASH in “TIME OR YOUR LIFE”, by Alex Segura and Kenneth Loh. Monsters stalk the streets while a Halloween festival is going on in the city. Frankenstein’s Monster shows up, and people fear him because he’s stitched together from parts of multiple corpses and also he’s freaking HUGE. But is he the true threat? Or is he there hunting something far WORSE? The other monster in this looks like something out of a Sam Raimi film. WAY “Army of Darkness” or “Drag Me To Hell”. A text message brings Barry Allen, THE FLASH, to the rescue! There’s a decent scrap between The Flash and Frankenstein’s Monster, which I guess is cool in and of itself, but there’s not much else to hang your hat on here. The boobs on the other monster and some blood might make you wanna skip this one if reading with your little ones. Grade: C.
WONDER WOMAN and DEADMAN in “A NIGHT TO REMEMBER”, by Vinton Heuck and Dean Zachary. Deadman tails a lowlife to a cult ceremony led by FELIX FAUST, who’s had CHEETAH steal something from the museum in order to complete the ritual. Wonder Woman shows up and cleans house, and Deadman gets the brief pleasure of a woman’s touch, when Wonder Woman rewards him with a kiss on the cheek for his heroics. This was a nice story. I liked Deadman’s voiceover, and Wonder Woman vs. Cheetah is always fun. Grade: B.
MISS MARTIAN and THE BLUE BEETLE in “MEDUSA NON GRATA”, by Bryan Q. Miller and Trevor McCarthy. KLARION THE WITCHBOY (And his cat TEEKL) go out trick or treating, and wind up being laughed at by a couple who answer their door, expecting to see kids there. Klarion doesn’t appreciate the reaction he gets, so he turns the couple to stone. He then starts turning EVERYONE to stone! Meanwhile, Blue Beetle is teaching Miss Martian about Halloween, and accompanying her on a walk through the neighborhood, stopping for treats of their own. Klarion’s antics grab their attention, and a quick conflict ensues. I rather enjoyed this one. The flirtation between the heroes is endearing and cute, and Teekl the Cat totally steals the show as Klarion’s familiar. “I can haz ur soul?” is the best line in the whole book. No gore, a talking cat, and art that looks to be pulled directly from a TV cartoon show means the kids will probably dig it, and I think most comic readers can relate to both the Blue Beetle AND Klarion in this story. “I detect an inflated sense of self worth. From the cat.” Nicely played. Grade: B. 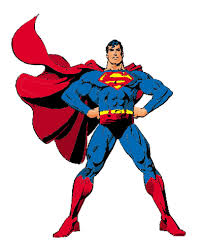 SUPERMAN and THE DEMON in “FEARS OF STEEL”, by Brian Keene and Stephen Thompson. Some kids out for Halloween fun in Metropolis stumble upon a very distressed Superman. They’re not sure what to make of it, but we the readers can see that he’s got an invisible parasitic demon on his back, attempting to take over the Man of Steel’s mind. The fiend has him seeing all the things that rattle him most: Lois dying, his Earth and Kryptonian fathers seeing him as a disappointment, etc. THE DEMON shows up and talks Supes out of it, makes him see that people care about him and that he has nothing to fear. If all this sounds kinda hokey, that’s because it IS. Blah. Grade: C-.
Overall, I’ll give the book a B-. SOLOMON GRUNDY’s presence is sorely missed here, as he’s featured prominently on the cover, and he’s a natural fit for a Halloween story, yet he’s nowhere to be found inside the book. I would’ve liked to have seen more season-appropriate villains, like TOYMAN maybe, in some creepy kinda stories, but the only villains included are Klarion, Felix Faust, Scarecrow, and Cheetah. Still, if you’re just in the mood for some spooky fun, and don’t feel like being bogged down
with crazy continuity issues, you’ll find many iconic heroes here, in stories that are instantly accessible to all. But if you only have money for ONE Halloween special from the Big Two, Marvel’s TOMB OF TERROR is a bit better. Though, that one’s certainly NOT for children!
Add me on Facebook!!!!
When not hanging out at The Horror Hotel, Mark Mackner can be found creating such local indie horror gems as DAISY DERKINS: DOGSITTER OF THE DAMNED!, EVIL BREW, THE HALF-LIFE HORROR FROM HELL or: IRRADIATED SATAN ROCKS THE WORLD!, and EMBALMO!  He’s also the resident Spider-Man scholar over at geek site POPTARDS where he writes SPIDEY’S WEEKLY WEB-UP.  In 2011, he’ll be directing his latest original script PROM NIGHT ABORTION!

Posted by Rob Dimension at 4:38 AM